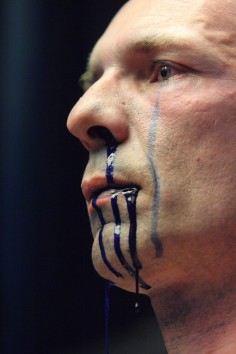 Work: Bleu Remix is the sequel to Bleu provisoire, created in 2001–a performance in which Yann Marussich let a blue-tinted biological liquid ooze through the layers of his skin, representing the movement of the body’s inner processes. The soundtrack to Bleu provisoire is remixed for each performance of Bleu Remix by a different local musician, bringing an element of uniqueness to each event. In Bleu Remix, the performer, wearing nothing but white briefs, sits on a reclining chair in a transparent glass cage. Once again, the artist takes us on an intimate journey through his body. He sits motionless, opening and closing his eyes. Gradually, blue tears run down his cheeks, blue snot runs from his nose, and blue spit trickles from his mouth. He begins to sweat, first under his armpits, then his forehead, back, belly and legs: his whole body is covered with pearls of blue sweat. While searching for a kind of universal human being, Marussich takes the essence of Bleu Provisoire’s concept, mixes and transforms it to shake the senses and reveal the frailty of reality. With imperceptible movements, an intense gaze, and blue perspiration made visible, Marussich opens the paths between the inside and the outside world–secret passages from the unconscious, straight to the conscious. Why the colour blue? The colour relates to wisdom, serenity and dreams. It is ever-present around us, and yet doesn’t exist inside our bodies. It only exists in our dreams and our subconscious. The colour blue refers to life, journeys and discoveries in the literal sense as well as the figurative (personal introspection). The intensity of the performer’s presence makes it unbearable for the audience to hold its gaze. The subject “expressing” the blue ink takes the audience through a human experience that reaches the realm of the supernatural. Text: Anne Rochat English translation: AJS Craker.

Recorded, Filmed, and Edited by Cindy Yeh
In his spectacle-installation Bleu Remix, Yann Marussich returns to a theme originally explored in Bleu Provisoire (2001), a spectacle in which a mysterious blue liquid oozes through the layers of his skin as though it were the final effect or by-product of his body’s inner processes. In Bleu Remix, the artist once more invites the viewer to experience an intimate journey through the corners of his body. Each time the spectacle is performed, a different (local) musician accompanies Marussich. This unique, singular confrontation establishes a new relationship between the sound and image. The meeting of the two artists brings an element of risk and uniqueness to the event, as if the music explores the spectacle repeatedly, resulting in new ways of perception.
Marussich’s performance will be accompanied by live sound performances by artists David Schafer and Dominick Fernow.
Support for Bleu Remix at LACE is generously provided by swissnex San Francisco, the Swiss Arts Council Pro Helvetia, and the City and Canton of Geneva.
ABOUT THE ARTISTS
Yann Marussich, a unique character in contemporary dance, delivers performances that have a true impact on the audience. Since 1989, he has developed scores of performances and choreography that have been presented internationally.
In 2001, Yann Marussich choreographed Bleu Provisoire, his first totally motionless piece. Since then, his work has deepened in introspection, exploring the control of stillness while placing his body in direct confrontation with diverse solicitations and aggressions. He continues moving towards solo performance and body art in its poetic aspect. His most recent performances, which he considers examples of the development of his full-fledged style, have been presented in many festivals in Switzerland and abroad, including the collaborations L’arbre aux Clous and Glassed (2011), both with industrial music pioneer Carter Tutti, Hyphos with students of the Geneva University of Art and Design, and PÔ in collaboration with Vincent Barras (2012).
In 2008, he won the Ars Electronica price in the category Hybrid Art. He was an associate artist at the Grutli Theater for the 2010-2011 season. Since 2011, Yann Marussich has been supported by the Department of Culture and the Municipal Fund for Contemporary Art (FMAC) of the City of Geneva. From 1993 to 2000, Marussich worked as director of the Théâtre de l’Usine (Geneva, Switzerland) where he programmed almost exclusively contemporary dance and new forms of expression. He is also founder of the ADC Studio (Geneva) created in 1993.

David Schafer is a visual and sound artist working in sculpture, sound, sound performance, installation, and graphics. His work embodies aspects of language, site, and architecture through the appropriation of modernist themes, cultural memory, and theory. His work is concerned with the intelligibility, translation, and structures of language and architecture, both spatial and linguistic. Schafer has shown nationally and internationally and has received several public commissions. Most recently he participated in Radio Break, where he remixed a selection of John Cage compositions for an exhibition on the air in Los Angeles conveyed through low-power radio transmissions. He mounted two solo exhibitions this year, one at Studio10 in Bushwick Brooklyn, and the other at the Glendale College of Art, Los Angeles. In 2010 he permanently installed Separated United Forms at the Huntington Hospital, Pasadena, CA, and participated in conjunction with the Whitney Biennial with What Should a Museum Sound Like?, a sound performance and sculpture.

Dominick Fernow is an electronic musician best known for performing and releasing work under the moniker Prurient. He has released material on numerous independent record labels, such as American Tapes, Hanson Records, RRRecords, Load Records, Troubleman Unlimited, Chrondritic Sound, Kitty Play Records, and his own label Hospital Productions. Since the 2000’s, Prurient has become one of the most well-known and influential names in noise music, and has been covered in outlets such as The New Yorker, Pitchfork Media and The Village Voice. Fernow grew up in Wisconsin but now lives in Los Angeles and runs the Hospital Productions record label. More recently, Fernow has started marketing to the black metal audience with his label and creative works and is currently the primary live synthesizer player for Cold Cave. Fernow also releases industrial techno under the monicker, Vatican Shadow.

ABOUT SWISSNEX SAN FRANCISCO
swissnex San Francisco is an initiative of Switzerland’s State Secretariat for Education and Research (SER), managed in cooperation with the Department of Foreign Affairs as an annex of the Consulate General of Switzerland in San Francisco.
A public-private venture, swissnex San Francisco is a platform for the exchange of knowledge and ideas in science, education, art, and innovation. Together with the network of swissnex outposts (Bangalore, Boston, Shanghai, Singapore) and individual Swiss science and technology counselors worldwide, it takes an active role in strengthening Switzerland’s leadership in these fields.
.
.
.
.
.
.
.
.
source: dance-techtv

In his spectacle-instalation Bleu remix, Yann Marussich returns to the theme already explored in 2001, in the Bleu Provisoire spectacle when he let a mysterious blue liquid ooze as blood would, through the layers of his skin, as though it was a final effect or a by-product of his body’s inner processes. This way, Marussich opened the paths between the inside and the outside world – secret passages from the unconscious, straight to the conscious.

In Bleu.Remix, the artist once more lets us experience an intimate journey through the corners of his body. While searching for a kind of a universal human being, he takes the essence of Bleu Provisoire’s concept, mixes and transforms the senses and uncovers the secret existing reality, which exists in everyone of us, even better.

Each time the spectacle is performed, a different (local) musician accompanies Yann This exceptional – unique and one-time – confrontation of a musician with a performance establishes a new relation between the sound and the created image. The spontaneous meeting of two artists brings an element of risk and uniqueness to the event, as if the music explored the spectacle over and over again and depicted new ways of perception.
Bio

Born in 1966, Yann Marussich is an isolated character. In contemporary dance and performance: “hypersensitive, puzzling, provocative, authentic” he delivers performances from which we don’t come out of unharmed. Since 1989, he has signed about thirty performances and choreographies broadcasted all over Europe.
From 1993 to 2000, he evolves in the domain of artistic programming as the director of the Théâtre de l’Usine (Geneva) where he programs almost exclusively contemporary dance and more specifically new forms of expression. He is also the founder of the ADC Studio (Geneva) created in 1993.

In 2001, Yann Marussich signs Bleu Provisoire, his first totally motionless piece. Since then, he is sinking into introspection and the control of stillness meanwhile confronting his body to diverse solicitations, or even aggressions: that is where the poetic space of the performer is located, in an often violent contrast between what his body is undergoing and an absolute impassivity.

With the support of the City of Geneva, la Loterie romande et Pro Helvetia