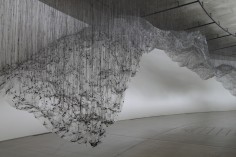 source: highlike
Statement: Onishi Yasuaki uses wire, glue line and crystallized urea for this installation. The wire makes organic parabola line from the ceiling. He dripping glue through it, and vertical thin glue line is connecting our ground. Crystallized urea appears on glue line and wire. Empty space are filing some phenomena which is gravity, time, action, heat, crystallization. We can discover new landscape in it.
.
.
.
.
.
.
.
.
source: azurebumble

“I am interested in the visible and the invisible thing. Through my art work, I get information from the space and leave clues on the space. Form, color and movement is changed to the simple element, like points, lines and lights. It tells us the limited information. I would like to show the way of perception of this world through my work. Though each work doesn’t mean some specific matter or story, it will stimulate each imagination and thought. I think we can discover new value from the trivial matters.”
.
.
.
.
.
.
.
source: procureddesign

Of the existing accounts of Yasuaki Onishi‘s portfolio, few have investigated his work beyond commending the artists’ ability to manipulate space. However, there is a strong link which runs throughout his entire body of work – namely the interaction between the ideas and implications surrounding kinetics.