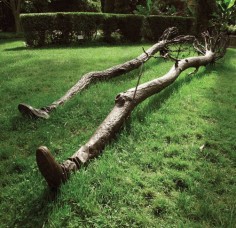 The Cuban artist Yoan Capote’s inaugural solo exhibition in London. A leading figure of the burgeoning Cuban art scene, Capote creates psychologically resonant sculptural works in a myriad of media that address a multiplicity of themes – ranging from those of the human condition (isolation, anxiety, desire, claustrophobia, obsession) to cultural identity, migration, politics and the economy.

While Capote’s works are clearly informed by his experiences growing up and living in a politically turbulent and isolated nation, there is a universal dialogue to them that transcends the autobiographical. Despite the serious implications behind his work, there is sardonic playfulness in their presentation, recalling the Surrealists and their interest in the paradoxical. From Will of Power, a monumental ladder affixed to a rocking chair base; to Secreto (Mucho por decir), two rubber molds of ears connected by a soundproof glass tube; to Romance, conjoined umbrellas; and Casados, bronze cast shoes that literally meld into one another (originally worn by newlywedcollectors Dasha Zukova and Roman Abramovich), his work promotes immediate humorous associations that go on to reveal more complex issues.

Isla (La Espera) is a sculptural painting fastidiously fashioned from nails, fishhooks and oil paint based on Capote’s childhood memories of growing up on a politically isolated island, longing to know the United States and beyond. What initially registers as a serene, benign seascape turns into a powerful, foreboding image connoting danger and impenetrability as the materiality of the piece is explored. Migrants consists of two slender cast bronze trees that are seemingly uprooted from the earth as they anthropomorphize into human feet that lie futilely on the ground, serving as a metaphor for the physical and psychological conflicts associated with the experience of migration.

The exhibition will also include a steel installation realized exclusively for this show, entitled Lacerante (Mi Silencio), as well as examples of Capote’s highly conceptual photographic work.
.
.
.
.
.
.
.
source: ignantde

‘Yoan Capote, a young Cuban artist who came to international notice in the 2001 Havana Biennale, creates paradoxical images with political and psychological overtones. In sculptures and beautifully crafted academic drawings (all 2004), he merges human organs with inanimate objects, rearranges the human body and reinvents the purposes of everyday things. (…) Capote’s work is both thought-provoking and humorous. He brings to mind the absurdist impossibilities of Rene Magritte, overlaid with a sense of nostalgia for physical experience in an increasingly digital world.’
.
.
.
.
.
.
.
source: jackshainman

Yoan Capote uses sculpture, painting, installation, photography, and video to create analogies between the visual poetry of inanimate objects and the intangible world of the mind. He merges incongruous items, such human organs and mundane objects, to plumb ideas of humanity. His work deals with the intimate and the personal, while investigating constructions that are based in power and difference. In a 2010 ARTINFO interview with Scott Indrisek, Capote said “Over-representation is not an issue for me; it’s actually a characteristic of pop culture that I’m intrigued by. In my case, I consider my use of iconic images a sort of Neuro-Pop, because my approach to the images is conceptual first and foremost. The common thread in all my work is that it is weighted in the condition of the human psyche.”

In Art in America 2006, Eleanor Heartney wrote of Capote’s work, “He creates paradoxical images with political and psychological overtones. In sculptures and beautifully crafted academic drawings, he rearranges the human body and reinvents the purposes of everyday things… Capote’s work is both thought provoking and humorous. He brings to mind the absurdist impossibilities of Rene Magritte, overlaid with a sense of nostalgia for physical experience in an increasingly digital world.”

Capote was born in Havana, Cuba in 1977, where he lives and works. The unique experience of being Cuban, influences his work, which often deals with themes of migration or government that reference Cuban identity yet is universally accessible. He studied at the Provincial School of Art in Pinar del Rio, Cuba (1988–1991), the National School of Art in Havana (1991–1995), and the Higher Institute of Art in Havana (1996–2001).

Capote has exhibited extensively, including in Portugal, Spain, Switzerland, France, England, Panama, Cuba and the United States. Capote represented Cuba at the (2011) Venice Biennale along with three other artists in Cuba Mon Amour. He installed his thirty-foot tall monumental sculpture Stress in both the (2012) 11th Havana Biennial and in Portugal Arte 10 EDP in Lisbon in (2010). A group of outdoor sculptures was exhibited recently at LongHouse Reserve in Easthampton, New York.

Capote’s work is included in many public collections including 21c Museum Hotel, Louisville, Kentucky, the Kadist Art Foundation, Paris and San Francisco, the Pizzuti Collection, Columbus, Ohio and Daros Latin America, Zurich, Switzerland. He has been the recipient of numerous awards including International Fellowship Grant from the Guggenheim Foundation (2006), a UNESCO Prize (2000), a Pollock-Krasner Foundation Grant (2006), a Vermont Studio Center Fellowship (2002) and a residency at the Brownstone Foundation in Paris (2003).

Jack Shainman Gallery has represented Capote since 2010. Solo exhibitions in the gallery include Mental States (2010). His next exhibition with the gallery will be in 2014.