It´s fire, you can touch it 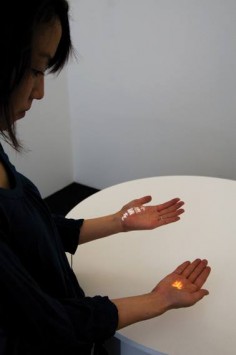 On the other hand, an example of a work representing a difference in which the viewer is faced with participation in the event, is an installation by Yoko Ishii and Hiroshi Homura It’s fire, you can’t touch it (2007). In this work which appoints the active environment, onto the hands reached out by the participants, miniature light signs are projected—a Japanese tanka poem is running through, glyphs change form, fuse together, move. Here we deal with a poetic spectacle in which the perspective of cognitive interactivity, set off in contact with poetry, is complemented by tactile sensations and poems themselves are as if extracted from the environment by interactive gestures of receivers-readers.