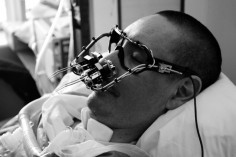 source: momaorg
TEMPT1, a Los Angeles-based graffiti artist and activist, was diagnosed with amyotrophic lateral sclerosis (ALS) in 2003, and the disease soon left him entirely paralyzed except for his eyes. The team that developed EyeWriter equipped a pair of eyeglasses with eye-tracking technology and custom software that could capture TEMPT1’s eye movements. From his hospital room, wirelessly connected to a laptop and laser-tagging apparatus installed in downtown LA, the artist could draw his tag and have it projected on buildings at a superhuman scale in real time, so viewers could see the glowing graffiti as they were created. The EyeWriter research project was a collaboration among TEMPT1, the members of Free Art & Technology (FAT) lab, the openFrameworks community, and Graffiti Research Lab (GRL), with support from the Ebeling Group production company, the Not Impossible Foundation, and the Design and Technology program at Parsons The New School for Design, New York.
.
.
.
.
.
.
.
source: evan-roth
The EyeWriter project is an ongoing collaborative research effort to empower people who are suffering from ALS with creative technologies. It is a low-cost eye-tracking apparatus & custom software that allows graffiti writers and artists with paralysis resulting from Amyotrophic lateral sclerosis to draw using only their eyes.