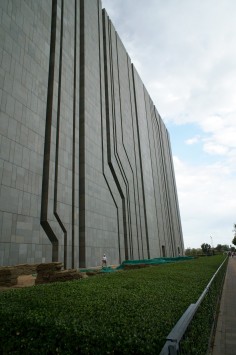 The rapid development of the digital age has greatly impacted upon our society, our life and the urban realm. If the industrial revolution resulted in modernism, The Digital Beijing building begins to explore what will occur in the digital epoch. The building served as the control and data centre for the 2008 Olympics. The concept for Digital Beijing was developed through reconsideration and reflection on the role of contemporary architecture in the information era. Resembling that omnipresent symbol, the bar code, the building emerges from a serene water surface. The façade itself is detailed to resemble an integrated circuit board. The abstracted mass of the building, reflecting the simple repetition of 0 and 1 in its alternation between void and solid, recreates on a monumental scale the microscopic underpinnings of life in the digital age to form a potent symbol of the Digital Olympics and the Digital Era.
.
.
.
.
.
.
.
source: archinect

Studio Pei Zhu is an international design team located in Beijing China. Established in 2004 our projects have received many awards and recognitions. Top projects include the Guggenheim Abu Dhabi pavilion and Guggenheim Beijing, and the recent completion of the OCT design museum in Shenzhen. Our work focuses on Cultural projects such as museums, public buildings, culture centers, and theaters, throughout China and abroad.v