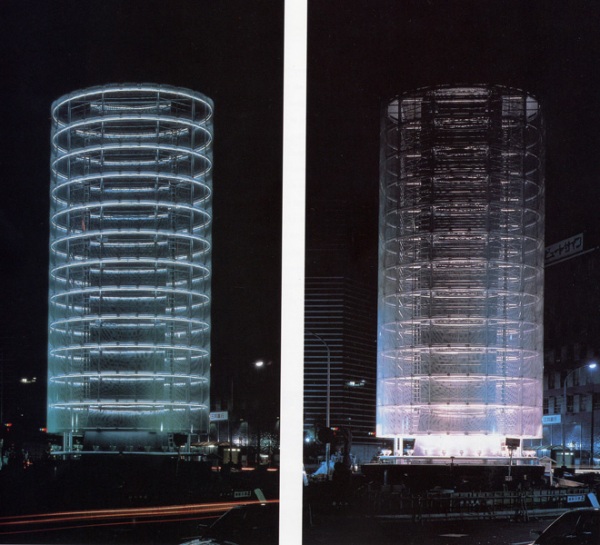 تويو ايتو
伊东丰雄
טויו איטו
伊東豊雄
도요 이토
Tower of Winds
During the day the perforated metal panels that cover the Tower of Winds reflect the city image and make the design appear humble and simple. But during the night, it gets lit up in an ever-changing combination of light intensity and colors. Using computer software, the lighting follows the wind speed and noise levels changing the Tower’s appearance accordingly. The Tower of Winds features more than 1300 light bulbs and 42 flood lights and neon rings (on each floor). The small lights change their colors according to the wind’s noise level and the rings change their intensity according to its speed.
Basically, the Tower of the Winds by Toyo Ito is a wind indicator in a constant relationship with the city and the natural environment, a junction between the two. It is placed at the train station area, welcoming the passengers arriving in Yokohama and its functional role is accommodating another natural element. Surprisingly the Tower of Winds houses the water tanks for the air-conditioning system of the underground mall below. The Tower is not a new construction, but a re-designing of an old concrete tower that already existed there since the ‘60s.