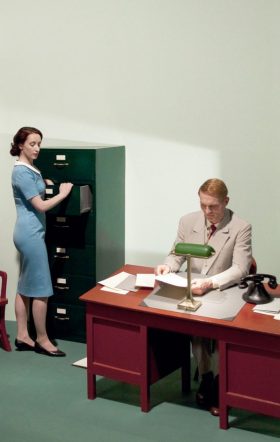 Shirley
Visions of reality
FILE FESTIVAL
Shirley is a woman in America in the 1930s, ‘40s, ‘50s, and early ‘60s. A woman who would like to influence the course of history with her professional and socio-political involvement. A woman who does not accept the reality of the Depression years, WWII, the McCarthy era, race conflicts and civil rights campaigns as given but rather as generated and adjustable.
Edward Hopper movie 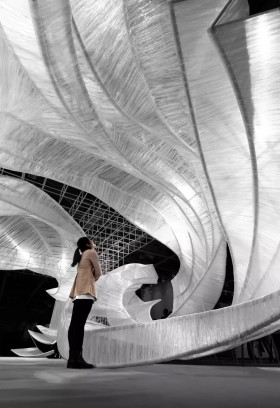 Brazil Now
BRAZIL NOW is a composition that addresses increasing militarization and surveillance within urban areas. Its geographical and acoustic reference is São Paulo, the largest megacity in Latin America. The piece is based on field recordings that capture the symptoms of a Latin American variant of turbo-capitalism with its distinctive acoustic features. Eruptive public demonstrations on the streets are often accompanied by loud, carnivalesque elements. These are controlled by a militarized infrastructure, openly demonstrating a readiness to deploy violence. The sonic documents are analyzed by machine learning algorithms searching for acoustic memes, textures, and rhythms that could be symptomatic for predominant social forces. The algorithmic results are then used as a base for a score and its interpretation through a musical ensemble. The piece drafts a phantasmatic auditory landscape built on the algorithmic evaluation of urban conflict zones. 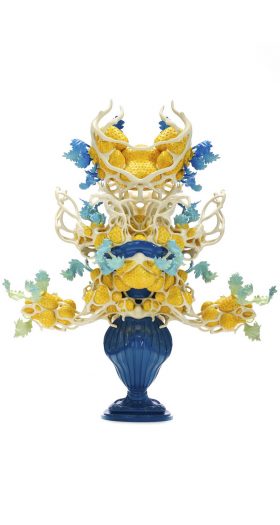 Plant Mutation
The idea of mutation and manipulation has always appealed to Nick Ervinck’s imagination. In the ‘plant mutation’ series, he uses 3D experiments to explore ideas of both organic and genetically engineered life forms. Nick Ervinck created an openness that will attract the viewer to consider his work from different angles. These works have both a poetic and a critical social dimension. On the one hand, the sculptural contradictions, such as inside/outside and rough/smooth, make these works purely poetic. The visual language of these organic sculptures has a surprising impact. 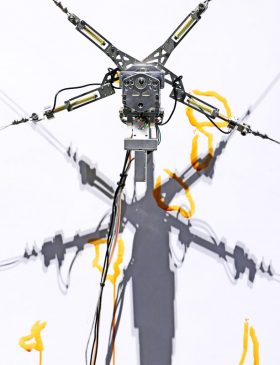 Weight of insomnia
With his new series of paintings, Liu uses a machine programmed to capture movement in public spaces and translates this to marks on canvas. The machine has no heart, no desires, no ulterior motive. It does not sleep but obeys its instructions for as long as the artist decides. And yet the results have a strange power to move us. It seems that, despite all efforts, subjectivity can never truly be extinguished. Join Liu as he discusses this latest painting project, the conflict and changes in Chinese society that have influenced his artistic approach and how we might all be affected by the ‘weight of insomnia’. 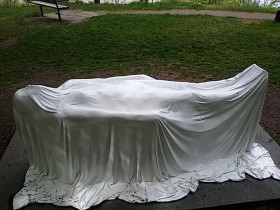 Levitating Woman
The way American artist Matt Johnson (born 1978) experiments with shapes and materials is apt to take the spectator by surprise. His creations are endowed with whimsical as well as subtle aspects. Drawn towards the mysterious and spiritual, Johnson remains deeply rooted in art history as he comments on life’s complexities. He often chooses materials that seem to conflict with his subjects. 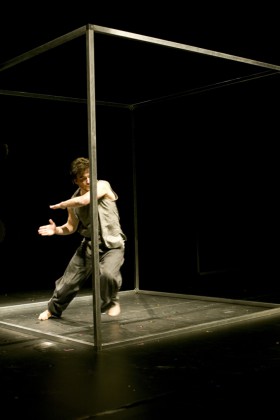 Sidi Larbi Cherkaoui and Damien Jalet joined forces with visual artist Antony Gormley to create Babel(words), a dance performance that explores language and its relationship with nationhood, identity and religion. Taking the tale of ‘The Tower of Babel’ as its starting point, Gormley’s 5 huge 3-dimensional frames hint at a nameless intersection in a faceless city near the borders that define a no man’s land. We watch as the action flows from private to public, intimacy to extroversion , and the individual to the collective – while choices of faith, space and community are made and we are reminded that to some the tale of Babel represents the gates to enlightenment, to others – chaos, confusion and conflict. 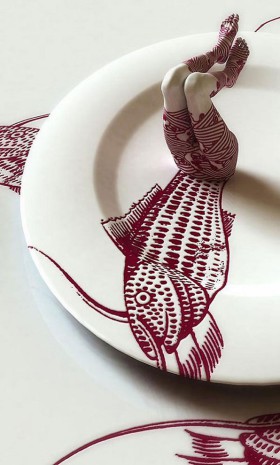 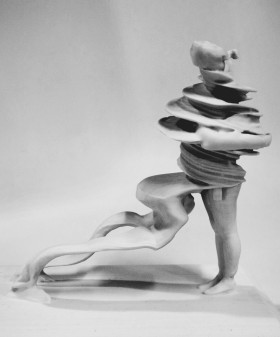 Embrace in Progress
Embrace in Progress explores conflicted feelings of shared intimacy. It is inspired by personal and cultural experiences where human contact is not commonly practiced in social interaction. The daunting and unfamiliar proximity of being captured in someone’s arms distorts one’s sense of time. The project was inspired by slit-scan photography and uses depth sensors to capture a series of intimate embraces. These 3D printed pieces recreate the act of embracing and are represented in a static form by the flow of movement twisted because of time. 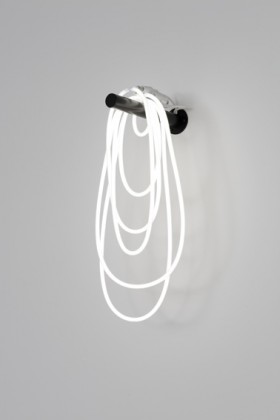 Lamps, furniture, bicycles, typography, museum plinths: Mathieu Mercier’s artistic creation moves masterfully between the categories of art and everyday culture, reflecting the concepts of twentieth-century Western culture, particularly those of the modern age, in the area of conflict between architecture, design and art.

Ways of Water – A Love Potion for Nature
Alexandra Zierle and Paul Carter’s collaborative work is interdisciplinary, multi-sensory and site and context responsive spanning performance, happenings, interventions, sound, video and installation. Through their practice, Zierle & Carter critically examine different modes of communication and what it means to be human both as individuals and as a ‘collective entity’. Their work addresses notions of belonging, cultural identity, the dynamics within relationships, harmony through conflict and the transformation of limitations. 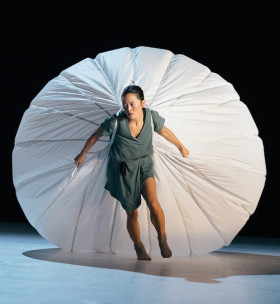 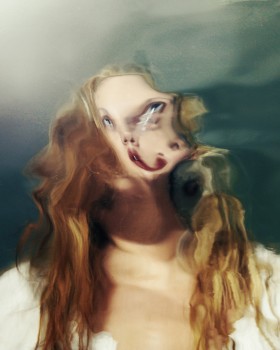 Glass Houses: Self-Portraits In A Moving Mirror
“In this project, I confront questions of self-image and the ways in which our interior worlds conflict with our exterior form. How does the image that we present to the world differ from what we see when we look in the mirror? If our desires, fears, secrets and vulnerabilities were manifested physically, what might they look like?” 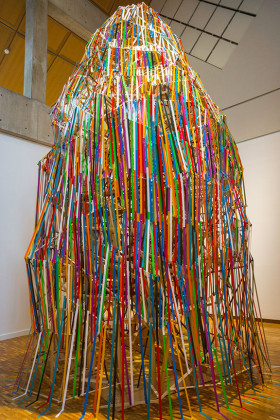 “A sense of location within one’s physical space, culture and history plays a crucial role in the creation of my work. While images and ideas often begin with the landscape, I am also drawn to the incorporation of non-art materials (e.g., foam, packing peanuts, bubble wrap and PVC tubes) and the juxtaposition of ambiguous imagery, deliberately subverting viewer’s visual expectations. My work invokes the paradoxical notion of “harmonious conflict” where compositional/conceptual relationship of materials and images are questioned and yet valued.” 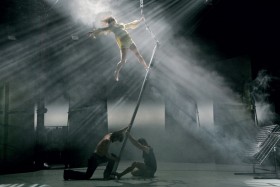 As We May Feel
file festival

“As We May Feel” A parody of the 1945 text “As We May Think”, by Vannevar Bush What enduring benefits did science and technology bring to human beings? First of all, science and technology have extended the humans’ control on their material environment, helping them to perfect their food, their clothes, their dwelling, and gave them more security, allowing to live above the level of mere subsistence. Later on, they have permitted a wider knowledge of the biological processes that occur within our bodies, allowing the control of a more healthy and lasting life, always promising an enhancement of mental health. Finally, they contribute to the effectiveness of our communication. We have therefore a reason to live beyond survival — abundant health and efficient communication. And how do we deal with our existential feelings and conflicts? We don’t have time for our feelings, we can no longer ruminate them. We bury them in secret wishes without bigger consequences. Should we care more for our feelings? Negligence has been our way of cleaning our lives of sentimental values. When we cannot sweep them, we zip them and eventually access them to solve conflicts and/or to organize our thoughts. This project offers the access, through a click, to a central that points to a series of paths toward “As we may feel”. The content of this simulation of a phone center has as its aim to create an encyclopedia of existential feelings and conflicts that represent human life in contemporary society. Welcome to our call center! 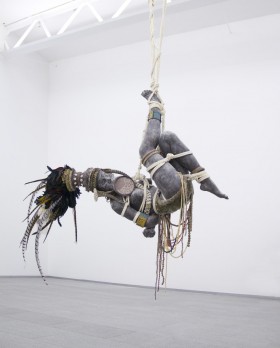 徐震
Play – Jessica
Contemporary artist Xu Zhen likes to provoke; his works have a special interest in conflict, in discomfort and in the purest nonsense, frivolous and megalomaniacal irony. 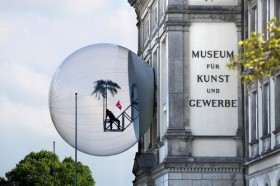 In view of the advancing climate change, the exhibition “Climate Capsules: Means of Surviving Disaster” at the Museum für Kunst und Gewerbe Hamburg poses the question: “How do we want to live in the future?” and draws attention to the socio-political consequences of coexistence under new climatic conditions. In view of the fact that the politicians are hesitant to enforce strict measures for climate protection and the citizens very sluggish about changing their habits, the change appears inevitable. The world community is accordingly confronted with the challenge of investigating various possible means of adapting to the climate change. This exhibition is the first to bring together historical and current climate-related models, concepts, strategies, experiments and utopias from the areas of design, art, architecture and urban development – pursuing not the aim of stopping the climate change, but envisioning means of surviving after disaster has struck. More than twenty-five mobile, temporary and urban capsules intended to make human life possible independently of the surrounding climatic conditions will be on view – from floating cities and body capsules to concepts for fertilizing sea water or injecting the stratosphere with sulphur. A symposium, film programme, readings, performances and workshops will revolve around the interplay between design processes and political factors such as migration, border politics and resource conflicts, and investigate the consequences for social and cultural partitioning and exclusion.