Listening Post is an art installation by Mark Hansen and Ben Rubin that culls text fragments in real time from thousands of unrestricted Internet chat rooms, bulletin boards and other public forums. The texts are read (or sung) by a voice synthesizer, and simultaneously displayed across a suspended grid of more than two hundred small electronic screens.Listening Post cycles through a series of six movements, each a different arrangement of visual, aural, and musical elements, each with it’s own data processing logic.Dissociating the communication from its conventional on-screen presence, Listening Post is a visual and sonic response to the content, magnitude, and immediacy of virtual communication. 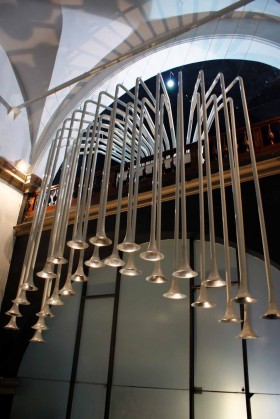