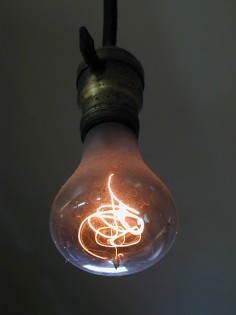 source:twistedsiftercom
At 117-year-old (as of June 2018), the Centennial Light is the world’s longest-lasting light bulb. Burning since June of 1901, it is currently located inside Fire Station #6 at 4550 East Avenue, Livermore, California, and maintained by the Livermore-Pleasanton Fire Department.

The bulb has been officially recognized by The Guinness Book of World Records, Ripley’s Believe It or Not!, and General Electric as the world’s longest-burning light bulb. The Centennial Light was originally a 30-watt or 60-watt bulb but now is very dim, emitting about the same light as a 4-watt nightlight. The hand-blown, carbon-filament common light bulb was manufactured in Shelby, Ohio, by the Shelby Electric Company in the late 1890s and was invented by Adolphe A. Chaillet.
During its long and illustrious life, the Centennial Light has been ‘off’ on several occasions but that has been due to human error or intervention and not the bulb itself, which has never ‘burned out’ or ceased function.

According to Wikipedia: Planned obsolescence, or built-in obsolescence, in industrial design and economics is a policy of planning or designing a product with an artificially limited useful life, so it will become obsolete (that is, unfashionable or no longer functional) after a certain period of time.
The rationale behind the strategy is to generate long-term sales volume by reducing the time between repeat purchases (referred to as “shortening the replacement cycle”). [source]
The light bulb and by extension the ‘Centennial Light’ has been oft-cited as a textbook example of planned obsolescence.