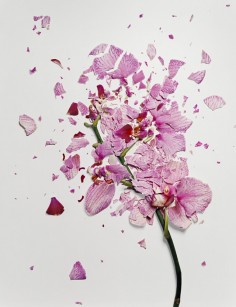 source:thisiscolossalcom
In his Broken Flower series photographer Jon Shireman soaked various kinds of flowers in a liquid nitrogen bath for up to 30 minutes before using a special spring-loaded contraption to slam them against a surface at high speed. He then photographed the hundreds of fragments spread across a white surface like sharp glass shards. Beautiful work. See the rest over on Flickr. (via photojojo)
.
.
.
.
.
.
.
.
source:beautifuldecaycom
After soaking them for thirty minutes in freezing liquid nitrogen, the New York based photographer Jon Shireman hurls flowers onto a hard, white surface, causing them to shatter into hundreds of pieces. The series, titled Broken Flowers, plays on our assumption that flowers are soft and supple; as an integral part of much still life photography, the blossoms normally symbolize youth and delicate feminine beauty. Under Shireman’s lens, however, the flora is transformed into something cold and hard. Against a sterile white backdrop, they appear sterile and brittle, a far cry from the spring buds that blow in the wind.

Throughout his career, Shireman has maintained a connection with flowers in decay; in other still lifes, he has cataloged the wilting of tulips and mums. This series, unlike those previous, is brutal and instantaneous. Where his other flowers underwent a slow, gradual death, these broken flowers are quickly frozen and violently ruptured. The process captured here is not a natural one but one that necessitates the use of a manmade element.

With almost surgical precision, Shireman’s lens focusses on the fallen flower, and he abandons the moody, romantic lighting he uses elsewhere in favor of high resolution and vivid color. Though flattened, the shattered blossoms maintain their basic structure; the bud, the stem, and the leaf can still be made out. The very veins of the plant are preserved by the liquid nitrogen. In this way, the flowers look like dead bodies in some unusual crime scene, outlined yet robbed of their living essence. Take a look. (via iGNANT, Feature Shoot, and Agonistica)
.
.
.
.
.
.
.
source:finediningloverscom
Liquid nitrogen is a favorite ingredient of cooks practicing molecular gastronomy. It’s been used by chefs like Alinea’s Grant Achatz and the godfather of ”techno-emotional” cuisine Ferran Adria. But what happens when it’s applied to flowers?

Photographer Jon Shireman experimented to find out. He soaked fresh flowers in liquid nitrogen for 30 minutes then photographed them when as they shattered on impact. His work, aptly called Broken Flowers, captures the fragility of flowers in an unexpected way.

We are used to chefs working with edible flowers but Jon’s photography takes floral to a totally different level. We hope you enjoy the images below, if you’d like to see more of Jon’s work you can do so on Flickr.