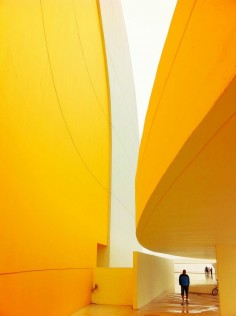 The Niemeyer Center could have done for Aviles what the Guggenheim has done for Bilbao, according to Janelle Zara of ARTINFO. Unfortunately, Spain economy has stunted such success. The center and institution are not being let go easily. Mayor, Pilar Varela expressed her appreciation for the institution as an economic engine. According to Cristina Carrillo De Albornoz of The Art Newspaper, protesters have gathered “every last Sunday of the month since late September” to express their support.

The regional government, led by President Alvarez Cascos, continues to look into the center’s finances. The government has also expressed its disappointment at the exhibitions and performances that have taken place since its opening. So while the finances and program remain under scrutiny, the future of the Niemeyer Center is still unknown. Talks will continue into December, mediated by Angeles González-Sinde, Spain’s minister of culture.