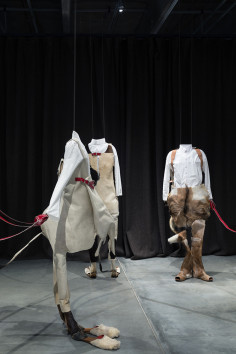 source:artpilcom
The Coming World: Ecology as the New Politics 2030–2100 is a major exhibition project that brings together historical and new works by over 50 Russian and international artists and will occupy the entire museum building. It takes a look at a future already in the making, when the environmental agenda will become one of the main political questions.

The suggested timeline references two widely speculative points in time taken from the sphere of popular science and iconic science fiction: 2030 is suggested as the year when existing resources of oil will be exhausted (Paul R. Ehrlich, Beyond the Limit, 2002), putting an end to the Oil Age; and 2100 denotes the year that, according predictions made by Arthur C. Clarke in the 1960s, human life will be able expand to other star systems. The exhibition alludes to a compressed period of time starting from the not too distant future, when the human race will be forced to live with the final knowledge that “there is no planet B,” through to future imagined in the past, in which humans were expected to progress sufficiently to be able to settle on other planets.

The Coming World: Ecology as the New Politics 2030–2100 exhibition at Garage Museum of Contemporary Art, Moscow, 2019 © Garage Museum of Contemporary Art
By looking into the speculative future, the boundaries of which are determined by predictions that are no longer considered accurate, the exhibition highlights the uncertainty of our knowledge about events to come, while suggesting a “performative” understanding of the future as it is being constructed today and shaped by our activities in the present. As theorist and critic T.J. Demos put it in his article Art After Nature (2012): “Just as nature is no longer understood as a pristine and discrete realm apart from human activity, art’s autonomy is all the more untenable when faced with ecological catastrophe.”

Mella Jaarsma, DogWalk, 2015–2016, 12 costumes of cow, sheep, and goat leather, stuffed cow and goat feet; two-channel video, Photo: Mie Cornoedus, Courtesy of the artist
The Coming Worldis developed around two main concepts: environmentalism and ecology. The first gives real urgency to the agenda of our relationship to nature, putting forward the idea that still marginalized topics such as climate change, species extinction, pollution, renewable energy, and overpopulation should be central to building alternative patterns of education, consumption, production, and leisure. This also means considering nature in an expanded field and interlinking biological, technological, social and political ecologies. The second concept, ecology, is understood as ecology in action, an insuppressible process where nature, human and other-than-human co-perform, or the world as a performed ecology and an ecology performing itself. This allows us to think of nature in embodied, active, distinctly relational terms whereby production of new knowledge is possible within the transcendent as well as everyday knowing of nature.

“Just as nature is no longer understood as a pristine and discrete realm apart from human activity, art’s autonomy is all the more untenable when faced with ecological catastrophe.”
The project will open with John Akomfrah’s six-channel video installation Purple (June 15 – November 17). Using archival footage and newly shot film from across several continents, the British artist has created an impressive saga about global warming and its effects on human life and the planet’s biodiversity.

The Coming World: Ecology as the New Politics 2030–2100 exhibition at Garage Museum of Contemporary Art, Moscow, 2019 © Garage Museum of Contemporary Art
The exhibition will feature a number of historical works that marked turning points in humanity’s relationship with nature: from sixteenth-century tapestries that for the first time presented nature as a phenomenon outside of human control and the beginning of landscape as a genre in 17th century Dutch painting, to the “organic culture” movement within the Russian avant-garde and the invention of land art in 1969, which made nature an artistic medium. The emergence of land art and environmental art coincided with a surge of interest in environmental protection, which led to the development of ecological policies at the state and public levels. In the half-century that followed, art went through various stages in its relationship with ecology: from objectivization to seeing it as a system (Hans Haacke’s Circulation) and from irony (Gnezdo group’s A Minute of Not Breathing to Protect the Environment) to practical solutions for everyday life, such as those suggested by the Danish collective Wooloo.
.
.
.
.
.
.
.
source:garagemcaorg
The twelve costumes created by Yogyakarta-based artist Mella Jaarsma operate both as an installation and as a set of separate, wearable items. The set comes alive once a week as a part of a performance in which actors wearing the “uniforms” transform into half human-half animals strolling through the Museum and holding each other on leashes. Alluding to a contemporary version of ancient anthropomorphic animals, which featured in numerous cultures as deities or god-like creatures with supernatural powers or which behaved outside established norms, Dogwalk reflects on the long and ambivalent relationship between humans and animals and, more broadly, on the overly simplistic binary oppositions we often operate within.
.
.
.
.
.
.
.
source:p-e-r-f-o-r-m-a-n-c-eorg
Mella Jaarsma has become known for her complex costume installations and her focus on forms of cultural and racial diversity embedded within clothing, the body and food. She was born in the Netherlands in 1960 and studied visual art at Minerva Academy in Groningen (1978-1984), after which she left the Netherlands to study at the Art Institute of Jakarta (1984) and at the Indonesian Institute of the Arts in Yogyakarta (1985-1986). She has lived and worked in Indonesia ever since. In 1988, she co-founded Cemeti Art House (with Nindityo Adipurnomo), the first space for contemporary art in Indonesia, which to this day remains an important platform for young artists and art workers in thecountry and region.