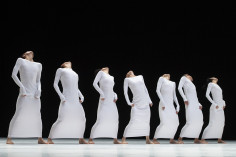 source:onassisorg
Distant China is a world unto itself and only rarely do examples of its contemporary CULTURE find their way out to us. Now, the Onassis STEGI brings us a Chinese choreographer who has conquered the world’s stages in recent years with his minimalist choreographies that invite the audience to envision and commune on a profound level with the work unfolding before their eyes.

Tao Ye rejects any attempts to harness his work to narrative, which is why he numbers his choreographies rather than naming them. Numbers 6 and 7 were choreographed one after the other, but are presented here as a single work. 6 takes us into a dark world: six black-clad dancers emerge out of a foggy landscape resembling smog-choked Beijing. They start moving with one ‘voice’, treading the ground firmly and dancing—chiefly with the upper part of their bodies—a ritualistic dance which stretches the human body to the very limits of its flexibility. An equally minimalist soundtrack and the exceptional lighting design of Sweden’s Ellen Ruge, a close collaborator of Mats Ek, who has done a lot of high-profile work here in Greece, complete the raw materials of this performance-experience.

If we see 6 as Yin, then 7 is Yang, a ‘reversed’, almost deconstructed, reading of the same material. This time, the six dancers emerge dressed in white against a demystifyingly white backdrop. The choreography is almost identical to that of 6, but this time the sound is produced by the dancers’ bodies, creating a musical composition by Tao Ye himself. Their breathing, sounds, bodies compose a landscape which is the same but different. In this repositioning of a work we have already seen, the work reveals a singular artist.
.
.
.
.
.
.
.
source:trafohu
Formed in 2008 by Beijing-based choreographer Tao Ye, TAO Dance Theatre is known for its collaborations across art forms including film and visual art, creating dances that have a mesmeric, trance-like quality. In 6 & 7, he continues his numbered series of experimentations that explore the potential of the human body as a purely visual form, freed from the constraints of story-telling or representation.

In 6, his six dancers move in dynamic and hypnotising unison, in a shifting landscape of light created by Swedish lighting designer Ellen Ruge. His latest work 7 continues Tao Ye’s fascination with pattern, precision and ritual, and is distinguished by a sound track of acoustic effects generated by the seven dancers’ own bodies. Both 6 & 7 will be accompanied by specially commissioned music from Chinese indie folk composer Xiao He.
.
.
.
.
.
.
.
source:theguardiancom
Tao Ye’s bare, sparse choreography takes his cast through rippling, repetitive cycles, better suited to the dark haze of the first half than the startling whiteness of the second

Chinese choreographer Tao Ye is so intent on purifying dance of all but its own physicality that he makes the average minimalist (Rosemary Butcher, say, or Lucinda Childs) look fussy and overblown.

The stage design for his new double bill is monochrome, black for the first piece, white for the second. The titles, 6 and 7, refer simply to the number of dancers in each. And with choreography that never deviates from strictly unison formation, there’s not a hint of individual character or relationship.

Even so, Tao Ye is a fundamentally poetic dance-maker. In 6, the cast are lined up near the back, their arms held taut, hands gathering up folds of their long, black skirts. Most of the choreographic action is concentrated on the tilting, circling, rippling action of their upper bodies. But in the hazy, flickering light that plays over them, they shape-shift into other worlds: at moments a chain-gang of workers – a human machine; at others a line of trees swaying in wind or the thick ropey current of a swollen river.

As Xiao He’s trance-like score intensifies, the dancers advance across the stage, drawing us deeper into their hypnotic movement cycles. I almost wish the evening had stopped here, but after the interval comes 7 – and with it a startling shift to whiteness.

Here, for the first time, we can focus clearly on the specifics of the movement and on the dancers’ exquisite stamina and control. But aside from the fact that the cast make their own music, a deep collective humming, 7’s choreography is a near replica of 6. And on this bright stage the effect is far less immersive, far more analytic. It’s less poetry we see than a white-board exegesis of Tao Ye’s style.