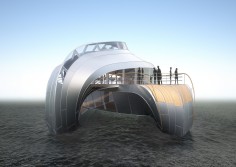 source:dezeencom
Thomas Heatherwick talks to Dezeen about his design for a riverboat in France in this interview filmed by Dezeen at Heatherwick’s ongoing exhibition at the V&A museum in London.

In the movie Heatherwick explains how the boat was commissioned to transport tourists and locals along the Loire river between Nantes and Saint-Nazaire.

Unlike a traditional two-hulled catamaran, the boat will have a single hull that folds back on itself and stretches over to form an infinite loop. This makes space for two diagonal viewing decks from which passengers can look out towards works of art along the river banks.

Heatherwick has been talking about his work in a series of movies filmed by Dezeen at his exhibition at the V&A. Hear him talk about his studio’s Christmas card tradition here, and how he created the UK pavilion at the Shanghai World Expo here. Find out about his design for a new London bus here, and see him demonstrate the machine that dispenses guides for the exhibition here.
.
.
.
.
.
.
.
source:independentcouk
As a child, Thomas Heatherwick was a fan of the comic inventions of W Heath Robinson, whose best drawings – the Automatic Back Scratcher, the Self-Operating Napkin – featured ingenious contraptions held together by cogs, pulleys, steam kettles, candles and lengths of knotted string.

Heatherwick also developed a habit of wondering why things around him weren’t better organised. “I wondered why ice creams were so small. So when they invented the Magnum, I thought, hang on, I had that idea. And I wondered why all the new buildings I saw seemed so unpleasant… There were lots of moments where I thought, why is that like that? Surely it could be better? All I feel we’re doing in our projects is trying to make things better.”

Three decades later, this youthful combination of ingenuity and civic improvement has borne fruit in many ways. Heatherwick has transformed the physical landscape of cities from Aberystwyth to Azerbaijan and from Stratford to Shanghai with his boldly fluid designs and engineering brainwaves. He’s also torn up the rulebook that says architects and designers shouldn’t involve themselves in the making of objects and buildings.

He and his team at Heatherwick Studio have designed, among a hundred other things, a bridge in Paddington Basin in west London that folds up into a circle when it’s not being used. They constructed the UK Pavilion, at World Expo in Shanghai 2010, as a shimmering cuboid “seed cathedral” of 60,000 silvery tingling 22-foot hairs. They transformed Harvey Nichols in 1997 by creating a huge polyester-and-plywood serpentine object that crawled all over and through its picture windows and threatened to overwhelm Knightsbridge. They created the Olympic Cauldron in 2012, with its 204 flame-bearing copper elements that rose simultaneously in the darkness at the climax of the opening ceremony, to converge into a massive, incandescent flame that symbolised global unity and made grown men weep. They rejuvenated the old Routemaster bus, giving it a double staircase, huge glass frontage, wraparound views of London and a saucy diagonal slash at the rear, turning the wheezy old rustbucket into a glamorous woman in a bias-cut frock. More immediately, he and his team are responsible for throwing a new garden bridge across the Thames from Temple to the South Bank.

There’s an elegant model of the garden bridge in a vitrine at Heatherwick Studio near King’s Cross Station. To get in, you must negotiate a gate with prison bars, a bleak courtyard full of bicycles and a Dr Frankenstein front door. Once inside, though, the atmosphere is more Santa’s workshop. The predominantly 20- and 30-something design team flit about or confer urgently at round tables groaning with cafetieres. Everything here shouts, “Brainstorm in progress!”.

Around us are mementos of past triumphs: small-scale models of a park in the Abu Dhabi desert or a university “learning hub” in Singapore, prototypes of less serious experiments, like his “rotationally symmetrical” chair, in which you can sit at absurd angles. Heatherwick shows me a section of the copper-nickel skin for the bridge, and invites me to lean against a section of parapet, like a prototypical tourist. I do so. It stays up. It works!

In the flesh Heatherwick is a twinkly-eyed charmer of 45, facially a cross between Rufus Sewell and Damon Albarn, with a mass of tight curls and a very cool, sky-blue waistcoat. There’s an air of the timeless artisan about him, like a cobbler or watchmaker from a Brothers Grimm folk-tale.

The garden bridge was first suggested 15 years ago by the actress Joanna Lumley. Since Lord Mervyn Davies launched the Garden Bridge Trust in 2013, the concept has evolved into something approaching reality. What had been Heatherwick’s initial thoughts about it?

“About 18 years ago, there was an exhibition at the Royal Academy called Living Bridges,” he says, “which involved a number of proposals for constructing a bridge with buildings on it, as London Bridge used to have. The proposals were for something a developer could make an income from, by selling apartments and shop space. But there was a sense of, ‘Hang on, we don’t want a wall built across our river’.
.
.
.
.
.
.
.
source:cbsnewscom
A new river boat designed for excursions on the Loire in France, capable of sailing in both shallow and deep waters, with maximum visibility for passengers, with the top of the boat a single continuous element from the hull – a closed loop.

“I thought I wanted to be an inventor, but then discovered you couldn’t study inventing!” he laughed.
.
.
.
.
.
.
.
source:heatherwickcom
Heatherwick Studio is a team of 250 problem solvers dedicated to making the physical world around us better for everyone. Based out of our combined workshop and design studio in Central London, we create buildings, spaces, master-plans, objects and infrastructure. Focusing on large scale projects in cities all over the world, we prioritise those with the greatest positive social impact. Working as practical inventors with no signature style, our motivation is to design soulful and interesting places which embrace and celebrate the complexities of the real world. The approach driving everything is to lead from human experience rather than any fixed design dogma. The studio’s founder Thomas Heatherwick comes from a background immersed in materials and making. His curiosity and passion for problem-solving matured into the studio’s current design process where every architect, designer, landscape architect and maker is encouraged to challenge and contribute ideas. Positive and pragmatic, the studio’s team are collaborators whose role is to listen, question, then lead the conception and construction of special and unusual places. Ingenuity and inspiration are used to make projects that are affordable and buildable. And our client is vital, who comes on the journey and challenges our thinking; together we look for the opportunities that might traditionally be overlooked. Our best future projects are the ones that will teach us the most.