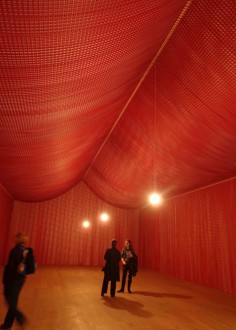 source:royalacademyorguk
A survey of work by Cornelia Parker RA is the opening show at Manchester’s newly renovated Whitworth Gallery – featuring a room hung with the negatives from a poppy factory.

“There were poppies as far as the eye could see,” says Cornelia Parker RA of her recent trip to Aylesford in Kent. But she is not talking about real flowers. She is recalling a visit to the village’s huge factory that produces paper poppies for Remembrance Day. This led to her new work War Room (2015, above), on view as part of her survey show at the newly refurbished Whitworth Gallery in Manchester.

Each year, over 40 million poppies are punched from rolls of red paper before being distributed across the world, but it is not the poppies themselves that Parker is interested in. She has taken the rolls of punched paper from the factory and layered them to create a tent-like poppy room. It is not hard to be moved by what those poppy-shaped holes represent – just like any memento mori, the effect is thought provoking but tremendously sobering.

The earliest sculpture on view in the show is Cold Dark Matter (1991), Parker’s massive mobile of an exploded shed. But the exhibition also takes in her impressive drawings, embroideries, video work (including War Machine, a new film of the aforementioned poppy factory), her string-wrapped version of Rodin’s The Kiss, photographs of statues with nets over them and even an artwork in the form of an opening event.

Blakean Abstract (2015) began the Whitworth’s show with a bang. Parker worked with graphene, a new super-conductive material made from a one-atom-thick layer of graphite. She collaborated closely with Konstantin Novoselov, who was awarded the Nobel Prize in 2010 for his work on graphene together with Andre Geim. Parker gained permission for the scientist to collect graphite particles from works in the Whitworth’s huge collection of Old Master drawings, including particles from a drawing by William Blake.

From this graphite Novoselov made graphene, which he then used to trigger the fireworks to mark the opening of the show. The idea of “a physicist controlling nature to a prescribed time and date” captivates Parker. And together with the fireworks, Parker blasted a chunk of meteor – gathered from the giant Arizona crater – into the sky. “William Blake writes about meteors in his book America, A Prophecy,” Parker continues, “so the idea of an American meteorite landing in Manchester was rather appealing.”

Parker’s layering of concepts is complex, and her project in response to the Magna Carta’s 800th anniversary is no exception. She is creating an embroidered version of the document, commissioned by the British Library to coincide with its show on the subject. Parker wants to capture “a contemporary snapshot of where the debate about Magna Carta is right now,” so the work will represent the Wikipedia page on the document’s 799th birthday on 15 June 2014.

Since that date, Parker has been busy asking people from all walks of life, from all over Britain and the Commonwealth – from prisoners and parishioners to celebrities and solicitors – to sew designated sections. The result, Parker explains, will be a long scroll that is “a testimony to the hours spent making, and to a history unpicked.”
.
.
.
.
.
.
.
source:travelswithmyartwordpresscom
Just watching BBC2’s, Britain at War: Imperial War Museum at 100, and Cornelia Parker revisits her installation of War Room at The Whitworth in Mancester.

Having stood in the centre of this room, it is unbelievably moving to be gazing on what is essentially missing: the poppy itself. This symbol of remembrance is ingrained on our national psyche. Every year, we have the opportunity to remember all those who gave their lives in warfare and to support the work of the Royal British Legion through purchasing our poppies, but here, Parker has done something quite extraordinary.

The punched out paper sheets and the deep red cannot fail to move you – the symmetry of the rows of poppies are reminiscent of the endless rows of graves, and if you have ever visited the War Graves in France and Belgium, you can see the connection and understand what Parker was showing us.

The room itself is draped in the sheets creating the effect of being in an exotic location:

The space makes you feel uncomfortable whether you are alone or with other people. Where do you stand? What should you do – it feels like a performance space, but what performer would be comfortable here and then you remember a phrase that you is linked to the information you can find on the WW1 Medal cards: “Theatre of War”.
.
.
.
.
.
.
.
source:artspycn
科妮莉亚·帕克（Cornelia Parker）作品展日前在曼彻斯特The Whitworth画廊举行。