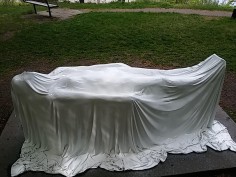 source:ekebergparkencom
–I like the simple things that have meaningful undertones or layers of complexities.

The way American artist Matt Johnson (born 1978) experiments with shapes and materials is apt to take the spectator by surprise. His creations are endowed with whimsical as well as subtle aspects. Drawn towards the mysterious and spiritual, Johnson remains deeply rooted in art history as he comments on life’s complexities. He often chooses materials that seem to conflict with his subjects.

Levitating Woman depicts a nude, hovering female form covered by a cloak which descends in soft creases, but the gentle and luscious shapes are an illusion. The sculpture is made of bronze and anchored firmly in the ground. Matt Johnson transforms a heavy, rigid material into something weightless, sensuous and mellow.

This piece can spawn a number of connotations, spanning from the use of draperies throughout art history to modern illusionists who seemingly make people levitate.

Levitating woman, 2013.
Bronze, 76 × 213 × 99 cm.
.
.
.
.
.
.
.
.
source:flickrcom
American artist Matt Johnson experiments with shapes and materials in a humoristic manner that takes us by surprise. Here we see a floating naked woman draped in a cloth that seems to drip from her body. But the apparently soft forms are an illusion – this sculpture was cast in bronze.

Johnson’s playful and experimental sculptures also have a deeper level. An allure to the mystical and spiritual combined with deep-seated art historical commentary allows his work to comment on the complexities of life.
.
.
.
.
.
.
.
source:newsabscbncom
The University of the Philippines (UP) Diliman community was rattled last night by accusations that a recently unveiled brass sculpture within campus, dubbed as the female version of its famous Oblation statue, was plagiarized from a Dutch artist.

Hours after a photo of Ferdinand Cacnio’s “UPlift” circulated online, some began pointing out that it bore a striking resemblance to Elisabet Stienstra’s “The Virgins of Apeldoorn,” which has been on display in the Netherlands since 2001. Both artworks depict a naked woman made to appear to be levitating.

Other similar sculptures were also brought up such as Quentin Bell’s 1973 “Levitating Lady,” which could be seen in Sussex, England, and his 1982 “The Dreamer” installed at the University of Leeds.

Massachusetts-based artist Andrew Devries’s 2009 “Innocence” was also thrown in the mix, despite Cacnio having said that he first came up with “UPlift” in 2008 for a local exhibit.

There’s also another piece called “Ascension” from Texas-born Lori Kiplinger Pandy, who said that she wanted her small-scale sculpture to be the “embodiment of the spirit in surrender.” She made it in 2012.

And albeit covered in cloth, Matt Johnson’s “Levitating Woman” utilizes a similar visual illusion with the ones listed above. Johnson, who lives in Los Angeles, debuted his work back in 2012.

Cacnio has already denied the plagiarism accusations, maintaining that “UPlift” is his own creation.