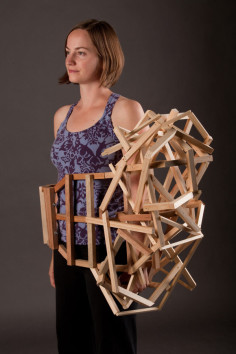 source: tracyfeatherstone
Tracy Featherstone is an Associate Professor of Art at Miami University. A SFA Scholarship and Teaching grand allowed Featherstone to travel to Ghana, West Africa in order to initiate a body of sculptural work dealing with the theme of personal environment. The language of home such as furniture, textiles, and construction is used to express the awkward, fragile, and tenuous hold on stability and structure in her work. The sculptures, wearable or free-standing, are frenzied attempts to create order from an ultimately unpredictable surrounding.
Tracy Featherstone lives and has a working studio in Hamilton, OH. She earned a BFA from the University of Cincinnati and a MFA from the University of Arizona. In 2006 she received an Ohio Arts Council Grant for Creative Excellence. Featherstone works individually as well as collaboratively with artists Krista Connerly, Denise Burge, Jenny Ustick, and Lisa Siders.
.
.
.
.
.
.
.
source: tracyfeatherstone
Wearable Structures materialize our daily struggle between control and chaos. The balance is precarious and can tip one way or another in an instant. Building materials traditionally used to construct living environments or other architectural securities are used in a frenetic fashion. Quickly, and maybe hopelessly trying to impose order on a situation that is moving out of control. The traditional role of structure or stability becomes mobile when placed on the figure allowing the individual to indulge in the illusion of stability. The mobile/wearable element of the work further subverts attempts of control and order. Similar to the way water will carve a new path around an obstruction, participant finds new ways to move about daily routines in ordinary fashion.
.
.
.
.
.
.
.
source: artsmuohioedu
Tracy Featherstone earned a Bachelor of Fine Arts with an emphasis in drawing from the University of Cincinnati and a Master of Fine Arts with an emphasis in printmaking from the University of Arizona. Tracy came to Miami University from Grand Valley State University in 2003 as Foundations Coordinator.
Tracy is a Cincinnati native and has been a part of the Cincinnati art community for many years. Before coming to Miami, she taught and served in non-profit programs such as Americorp’s “Public Allies” and “Artworks” which forged a strong local connection.
Tracy’s prints, drawings, and sculptures are widely exhibited and recognized. Her inspiration is drawn from childhood craft projects and daily interpersonal exchanges. Her work incorporates printmaking, soft sculpture, painting/drawing, and installation techniques to describe the irony and humor of personal experiences and interpretations of popular culture.
.
.
.
.
.
.
.
source: atcrux
When a few different things are blended together, a new form of goodness comes into existence. If you do not believe in this theory then start believing because when you will see the art-work of artist Tracy Featherstone, then you are sure to get astonished. Tracy has come up with an idea that fuses architecture, clothing and furniture altogether. These are the portable sculptures made of pieces of wood. The material takes the shapes that faces the flesh and follows the human body curves and finally binds the both of them. These structures are called wearable structures and are well conceptualized by Tracy.
The artist elaborates that the actual inspiration of these wearable structures came by the idea that wearable structures materialize one’s daily struggle between the control and chaos. The balance of such structures present with the great dynamics and stability. The building materials that were used in the past to build the living spaces and environments are used by Tracy to form a frenetic fashion that can provide architectural security to the wearer. This imposes a form of order into the times when you are moving out of control and balance.
Now, when you place these wearable wooden structures onto the human figure then traditional role of the structure or what you can call as stability turns into the mobile function and the wearer gets into the illusion of stability. Thus, control and order are two things that are achieved by these structures. Just like the water can find place to move when obstructed, similarly these structures give new ways to move around in daily life and routine. All these sculptures use the materials like wood, fabric, string and collage. There are about 7 to 8 odd designs that Tracy has worked out with and all look fabulous.