A fixture for a solar storm 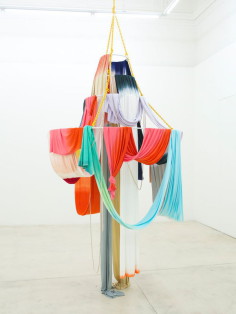 source:friezecom
Following on from her exhibition ‘The Weakened Eye of Day’ at the Irish Museum of Modern Art (IMMA) last summer, in which the artist tasked herself with compressing the past, present and future of the universe into just four small rooms, Isabel Nolan’s most recent body of work, shown at Kerlin, took on the challenge of addressing power, belief, death and the depredations of time.

If the IMMA show felt crowded, with the works too tightly packed into the available space to let them speak clearly, this exhibition was excellently paced. A combination of wall pieces, draped fabric hangings and a single, free-standing sculpture created a persuasive environment for Nolan’s meditations. The central conceit was the artist’s fascination with the funerary sculpture of the 17th-century metaphysical poet and cleric John Donne, which stands in St Paul’s Cathedral in London.

Close-up sections of the statue – the stone urn on which it stands and the figure’s slightly bent knees – are shown in a pair of photographs: I am wonderfully and fearfully made and For ever and ever, and infinite and super infinite for evers (all works 2015). Elsewhere, an image of the carved face appears on a swathe of fabric, draped on a bent flagpole in Hungry and Thirsty. Sorry and Angry. A Flag for John Donne, and in Bent, a series of four coloured pencil drawings, which also shows the fabled Androcles removing the thorn from the lion’s paw. The lion himself, in bright yellow papier-mâché complete with shiny bronze thorn, sat in the centre of the installation and provided another key to the themes of power and vulnerability that lie behind Nolan’s preoccupation with Donne, his life and death.

A 1595 portrait of the poet by an unknown artist in London’s National Portrait Gallery shows him as dark, romantic and dashing, and is re-created by Nolan in the oil pastel drawing Young John Donne 1. He’s now best known for the poem in which he calls on God to ‘Batter my heart’, telling him that he would never be chaste, ‘except you ravish me’.

Donne’s battle for faith is a test of what Nolan describes in her text piece, Bent Knees Are a Give, as ‘my thoroughgoing, far-reaching faithlessness’. Dying of cancer, the poet posed for his memorial statue dressed in a winding sheet. Knees slightly bent, he nevertheless stands, rising to face his future resurrection, as Nolan sees it, like ‘a lover on the verge of a long-desired consummation’. Set against this desire – the need for belief in an afterlife – are Nolan’s images of the paradoxes of earthly power: the lion brought low by a thorn, triumphal flag poles bending under the weight of their tattered and knotted fabrics, the enduring stone of Donne’s own memorial sculpture rubbed smooth by centuries of touch.

It’s tempting to think that a more apt metaphor for such themes may not come from Donne at all, but from Percy Bysshe Shelley’s Ozymandias (1817–18), written nearly 200 years after Donne’s death and telling of the decayed wreck of the monument to a king of kings, lying broken in the desert sands. Nolan’s interest is not in the vainglory of power, however, but in the vulnerability of hope and belief: fragile qualities that are nevertheless our most potent weapons in the face of death and nothingness. She finds a tenderness there, something that persuades her ‘that humanity might be something real […] not merely a preposterous and seductive fabrication’. Reflected in her own delicate drawings and draped fabric assemblages, such tenderness is a convincing proposition in an exhibition whose greatest strength was its subtlety.
.
.
.
.
.
.
.
source:immaie
Irish artist Isabel Nolan (born 1974) attended the National College of Art and Design and the Dun Laoghaire Institute of Art, Design & Technology. She works in sculpture, painting, textiles and text and explores notions of reality and identity, and the human compulsion to understand and define our situations and relationships with others. Nolan has exhibited in Ireland and internationally since the late 1990s, including solo exhibitions at The Model, Sligo, in 2011 and the Musée d’Art Moderne de Saint Etienne Métropole in 2012.
.
.
.
.
.
.
.
source:immaie
The startling objects of Isabel Nolan’s art take wildly
unpredictable forms, — but they are at the same time the fully consistent
outcomes of a singular, searching artistic sensibility. Nolan’s works evolve
out of almost scholarly processes of investigation — intensive enquiries into
cosmological and botanical phenomena, perhaps, or analytical scrutiny of
literary and historical texts. These contrasting means of representing reality
(and of comprehending its infinitely various components) provide divergent
points of departure for Nolan as she attempts to somehow account for the
enduring strangeness of the world, even in its most intimately familiar forms.

Recent large-scale sculptures in particular have
demonstrated an extraordinary capacity to realize in elaborate form the
uncertainties of the questing, subjective consciousness. Such works often have
the appearance of grand metallic doodles – line drawings that might imply
efforts towards rational modeling or more impulsive sketching, but that are
rendered dramatically, imposingly real. These sculptures (such as Slow Dirty
Solution, 2013) have an inhuman heaviness and scale, and yet their
precariousness — their barely held-together state — might well speak of states
of mind as much as material tensions.

Nolan’s recent solo shows include the The Black Moon,
curated by Sinziana Ravini in Palais de Tokyo, Paris and a solo in The Irish
Museum of Modern Art, Dublin, Musée d’art moderne de Saint Etienne, France
(2012). She represented Ireland at the 2005 Venice Biennale in a group
exhibition, ‘Ireland at Venice 2005’.