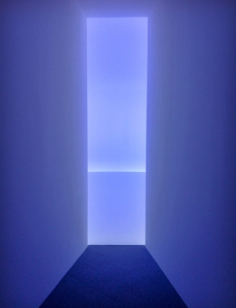 source:guggenheimorg
Born in 1939 in Globe, Arizona, Douglas Wheeler attended the Chouinard Art Institute, Los Angeles (now California Institute of the Arts, Valencia) in the early 1960s. Long associated with the so-called Light and Space artists working in Southern California in the 1960s and 1970s, Wheeler is best known for his immersive installations produced through the architectural modification of the space of an entire room. In these works, controlled applications of light, and sometimes sound, produce a sensate impression of infinite space. By dematerializing the architecture, Wheeler transforms these rooms into abstract worlds.

Wheeler began his career in the early 1960s as an abstract painter of white paintings subtly inflected with color. He first incorporated light as a medium in 1965 by attaching neon elements to his canvases—works that seem to glow with a self-contained inner light. Wheeler gradually abandoned paint as a medium to produce fabricated “light paintings” and “light encasements,” large, vacuum-formed Plexiglas squares edged inside with neon tubing. Installed in controlled environments—all-white rooms that have been modified and darkly lit—the light-rimmed forms appear to float in space. With his Light Walls, first exhibited in 1969, Wheeler expanded this concept to an architectural scale, transforming a room wall through the use of neon lights embedded within the floor, walls, and ceiling. And in the Infinity Environments that he inaugurated in 1975—for example, SA MI DW SN 2 75—an entire room is dematerialized; a visitor has the experience of entering a seemingly limitless white void, in which light itself assumes an almost palpable quality. Wheeler has also conceived installations that deploy acoustic elements in order to produce certain experiences. In PSAD Synthetic Desert III, initially described in a 1968 drawing and first realized at the Solomon R. Guggenheim Museum in 2017, a near-total suppression of sound contributes to an immersive environment that replicates the optical and acoustic sensation of distance in the Painted Desert in Arizona.

Uma figura chave no que é conhecido como o movimento de Luz e Espaço em Los Angeles durante os anos de 1960 e 1970, o artista norte-americano Doug Wheeler (nascido em 1939) é conhecido por sua singular experimentação com a percepção e experiência de espaço, volume e luz nas suas construções e instalações. Desde a sua primeira exposição no Museu de Arte de Pasadena, em 1968, o trabalho de Wheeler tem sido exposto em museus e galerias internacionalmente. Na série exposta na Bienal de Curitiba, “Luz e espaço”, o título de uma tendência reúne artistas interessados na luz surgida na Califórnia nos anos 1960.
.
.
.
.
.
.
.
.
source:artnewscom
It’s been ages since Doug Wheeler saw the five light-emitting installation works in his current show at David Zwirner in New York. These pieces with subdued palettes belong to his “Encasements” series, which Wheeler executed almost 50 years ago. Their ethereal qualities are evident. You view these pieces in a specially constructed white environment and move about it in booties that fit over shoes, sneakers, and boots. The corners of the spaces have been curved, and a specially laid floor is specific to the “Encasements.” You are hardly aware of any of this, though, because it’s the diffuse colors of the individual pieces and the way they project into the dim spaces they occupy that beckon visitors to the gallery. They can also be ephemeral. Comprised of vacuum-formed acrylic and polycarbonate, neon tubes, and other components, they are fragile. Several of the originals were damaged in transit after they were packed in the wrong crates. The artist broke the fifth one, dropping it as he tried to lower it onto a cleat by himself. It’s hard to picture any of that happening these days. Art with hefty price tags tends to get treated more carefully now, and assistants helped the 76-year-old, Santa Fe–based artist with his installation at Zwirner.

Fortunately, Wheeler is meticulous. He could refabricate the room-occupying works, which are double dated 1968, 1969/2014, 2015, because he still owns the same tools he used to make the “Encasements” at the end of the nineteen sixties. He also stockpiled the materials he used. As he told me late one afternoon, shortly after the Blizzard of 2016, as we sat in a showroom at Zwirner, “The tube color [of the work that occupies the center of the exhibition] doesn’t exist any more. But I have cases of it.”

Wheeler, who is rangy and has brown eyes, a head of beautiful, well-kept white hair, and an elegant white moustache, recalled how, back in the day, “it took me a very long time to make these pieces.” The expenses came out of his pocket because “there was not much support for me.” Nevertheless, he persevered. He’d finish one piece before he started another. An artisan in Santa Monica taught him how to blow glass, “which was great,” he mentioned. He learned, for example, how to make German ends, which no one does anymore. “To get a tight end,” he said, “you learn if it’s done too soon or too late, you get stress on the glass and it will break. It might even work for a little while before it breaks.”

Friends with the artists who exhibited at the Ferus Gallery, Wheeler was, as he put it, “in the wings.” Nevertheless, his impressive track record from that period includes a solo show at the Pasadena Art Museum in 1968. He held a one-person exhibition with Ace Gallery in Venice, California, the following year, and another at Ace Gallery in Vancouver in 1970. He also had a solo show at Düsseldorf’s Galerie Schmela in 1970. Jane Livingston curated a show of Wheeler and Robert Irwin in Fort Worth, Texas, in 1969 that traveled to the Stedelijk in Amsterdam; and Michael Compton organized a show of Wheeler, Irwin, and Larry Bell for Tate Gallery in 1970. However, the pioneering Light and Space artist’s first-ever solo show in New York would not arrive until 2012, at Zwirner. It was an all-white environment in which you experienced the cycles of a day as light ran the gamut from light to dark and back again. The space was somewhat disorienting as well. Gallery goers responded by waiting in line for hours in the cold and snow to see it.

Wheeler was raised in the mountains of central and north Arizona. Both his parents, who divorced when he was a young boy, were pilots. “That was a huge part of my life,” he told me the other day. He’d accompany his father, a doctor, to various rural outposts where his dad would land his Staggerwing Beechcraft—the 1930s version of today’s Learjet—on a local street and taxi up to the hospital. People made a fuss over the pint-size kid carrying a parachute. By the time he was in art school, he had his own pilot’s license.

Growing up, Wheeler had all sorts of odd jobs. One that would eventually influence him involved mending fences on a cattle range. At 4 a.m., well before dawn, he’d ride his horse along a fence looking for holes to fix with the tools he’d brought along. Before daybreak, he’d experience complete darkness, except for those times when the stars were bright enough to light the landscape.

Wheeler attended Chouinard Art Institute in Los Angeles as a scholarship student. He took classes with Emerson Woelffer, and said he was really shy. A top New York advertising company looked at his portfolio during his second year and offered him a job. Instead of joining the world of Mad Men, he turned them down. Soon afterward, he saw a paperback book of photographs of New York artists taken by Fred McDarrah of the Village Voice and realized for the first time that “artists could make art for themselves.” He was hooked.

When you talk to Wheeler about his installations, you realize he took his academic classes seriously. He’s not an art-for-art’s-sake kind of guy. Long ago, he began mapping space with equations. “I did drawings like that,” he recalled. “I’m not a physicist, but I like physics.”

As an artist, Wheeler explained, “I activate space.” Where some people only see color, he also sees matter. “Voids,” he has known for a very long time, “have matter,” he said. When the existence of the Higgs boson, first identified during the 1960s, was confirmed in 2012, he thought to himself, “Ah, ha. There is no empty space.”

The installations at Zwirner are voids filled with matter. “I can see the matter,” Wheeler said. Then, there’s the issue of gas, which is not a coherent light. Wheeler mentioned both argon and mercury to me. Argon is a colorless gas that exhibits a lilac or violet glow when placed in a high-voltage electric field. Mercury is used to manufacture vermilion, a red pigment.

Wheeler’s “Encasements” have broad, reflective acrylic panels that are 90½ by 90½ inches, upon which the artist sprayed lacquer. When lights embedded along the edges of the panels hit them from the side, color spreads dimensionally. The singular work at Zwirner, unlike the other four, is lit from its center. As modern age as all this sounds, it isn’t. When Wheeler talks about color, he could be talking shop with Paul Cézanne. After all, it was in a letter to the Master of Aix that Camille Pissarro mentioned how right the Post-Impressionist was about gray being in everything. Here’s Wheeler: “Most people don’t see the gray.” A bit of an alchemist, he’ll mix cool white against violet with a bit of blue. At Zwirner, there’s a slate “Encasement,” and another that’s mostly rose. It goes without saying that altering the measurements of the various components also affects what viewers experience. But in the end, for all the art and science that’s involved, a bit of magic comes into play. When it comes to this aspect, Wheeler is a modern day Merlin.

Long ago, there was a moment when Light and Space met Land Art. Shirley Hopps once asked Wheeler what he would do if he had a lot of money. He told her he would send a rocket 200 miles above earth and release barium oxide. “The particulate compound,” the artist explained recently, “would circle the globe at that orbit and refract sunlight to create an aurora borealis around the earth. It wouldn’t last forever.” Wheeler said, “Those are the things I thought about.”