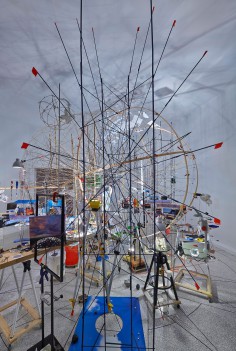 source:sarahszevenice2013com
Since the 1990s, Sarah Sze has developed a sculptural aesthetic that transforms space through radical shifts in scale, colonizing peripheral spaces, engaging with the history of a building, and altering the viewer’s perception and experience of architecture through large scale, site-specific interventions.

Triple Point brings together many of the ideas that Sze has developed during her practice. Central to the exhibition is the notion of the “compass” and the desire to locate ourselves in a disorienting world. Each of the rooms of the United States Pavilion functions as an experimental site, in which objects attempt to become instruments or assemblages that seek to measure or model the universe. The aspiration to model complexity—and the impossibility of that undertaking—is a key theme in Triple Point.

In thermodynamics, “triple point” designates a singular combination of temperature and pressure at which all three phases of a substance (gas, liquid, and solid) can exist in perfect equilibrium. Triangulation—the measurement of distance from three ordinal points—is also used to specify a unique position in space. Sze’s work references both these ideas—the fragility of equilibrium and the constant ambition to create stability and location.

Sze approached the Pavilion as a site of live observation and experimentation; much of the exhibition evolved on-site over a three-month installation period. Elements from the urban landscape of Venice—photographs of stone, leaves from the Giardini, tickets from the vaporetto—were collected to serve the growth of these installations. Small fragments of the sculptures were dispersed throughout shops and roofs around via Garibaldi, to be discovered by chance within the fabric of daily life. The exhibition inhabits the building and city, navigating its rooms, coalescing into systems, and ultimately degenerating into remnants—in an effort to inscribe a very fragile personal order upon a disordered universe.
.
.
.
.
.
.
.
source:kulturpunktorg
— How do you make a piece that as a sculpture is really interesting, so that it is more than just a habitat, more than a bird feeder or a bird house? Sarah Sze

I 2011-2012 ble en versjon installert i en annen park: The High Line i New York. Verket fikk kritikerprisen The AICA Award for beste offentlige utsmykning. I 2013 representerte Sarah Sze USA på den 55. Internasjonale Biennalen i Venezia.
.
.
.
.
.
.
.
source:klatmagazinecom
Andria was built so artfully that its every street follows a planet’s orbit, and the buildings and the places of community life repeat the order of the constellations and the position of the most luminous stars: Antares, Alpheratz, Capricorn, the Cepheids. The city’s calendar is so regulated that jobs and offices and ceremonies are arranged in a map corresponding to the firmament on that date: and thus the days on earth and the nights in the sky reflect each other.

In his painting entitled The Ancient of Days, William Blake depicts a powerful bearded man—a sort of pagan demiurge—crouching on the surface of the sun while measuring the exact curvature of the Earth with a pair of golden compasses. According to the myth recounted by Plato, the demiurge composed the universe out of cubes and tetrahedrons: he arranged, assembled and combined geometric shapes, like an infallible celestial engineer.

In a certain sense, Sarah Sze’s large installation in the US Pavilion displays a similar creative energy. The work of the American artist spreads through the rooms of the neo-Palladian building, occupying its corners and recesses and deconstructing the architecture of the place. A galaxy of disparate objects (leaves, stones, postcards, colored ribbons, bottles, books, drinking glasses) makes up a rich microcosm, delicate, chaotic and colorful. Far from the perfection of the undertaking of Blake’s demiurge, the multiple universe of Triple Point takes its inspiration (apparently) from the principle of causality rather than from a stubborn geometricism. It provides for gaps and defects, at the expense of the mathematical exactness of the whole. Sarah Sze reproduces a world that has been through a cosmic explosion: it is what is left of an ancient astral order.

Walking through the rooms of the pavilion, you feel disoriented. The traditional entrance of the building—set in its classical façade of a pronaos with columns—is now inaccessible; the sculptures redefine the spaces, modifying the usual route of the visit. All criteria of rational order break down; the juxtaposition of objects appears accidental. And yet Sarah Sze’s labyrinthine works elude any postmodernist interpretation: the artist does not renounce grand narratives of the world, though well aware that they will be patchy and imperfect. Just like the fragile world of Triple Point.

The title of the exhibition alludes to a concept of thermodynamics: the triple point is the situation in which the three different phases of a substance—its solid, liquid and gaseous states—coexist. It is a precarious equilibrium that is destined to break down; a sort of temporary set of samples of the various states that matter can assume. Triple Point recalls, in the arrangement of the objects, a kind of pseudo-scientific catalogue. It resembles a bizarre cabinet of curiosities, filled with objects of little value that compose weird galactic constellations. A subjective, incomplete and highly imaginative summa of the world. A visual equivalent of the Voyager Golden Record, the archive of sounds, images and words from Earth launched into space in 1977. Just like the latter, Sarah Sze’s work constitutes a curious inventory of our world—but one conceived for us, its inhabitants, rather than for forms of extraterrestrial life.