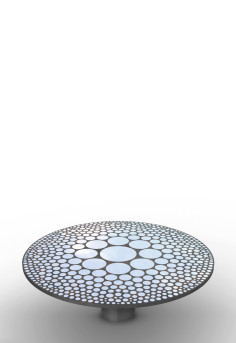 As Dezeen previewed earlier this week, Cocksedge has developed a method of uniting different metals through a freeze/thaw method that binds the different materials together through contraction and expansion to create a strong joint.

Cocksedge shrinks the metals by applying liquid nitrogen to the different materials. He then fits the contracted pieces into the pre-cut holes or slots of the room temperature slabs to form tabletops, desktops, and seats.

“These pieces are really about the making,” Cocksedge said. “Not everything should be mass produced.”

The designer spent five years perfecting the technique, working with craftsmen in Liverpool to fabricate the pieces.

At Friedman Benda he is showing three dining tables with different tops. The first piece uses only two metals: copper for the cylindrical base and aluminium for its round top. The table was the designer’s first effort to use the technique on a large, heavy piece.

He then applied the same process to create the Ring table, which features a more complex top with concentric hoops of brass, steel, copper and aluminium – metals that can not be easily joined using conventional techniques like welding.

The third, called the Multi-circle table, uses a round carbon steel top with dozens of holes plugged with stainless steel rods. The silverly stainless steel plugs contrast with the darker matte surface. Both the Ring Table and the Multi-Circle have clear lacquer-coated tops to maintain their polished finishes.

Cocksedge told Dezeen he is considering doing an outdoor collection where the metals would be left unfinished and would change over time.

The show also includes a bench with four seat backs that slot through the seat to double as legs. The seat backs are angled to create tête-a-tête conversational arrangements as well as provide stability for the piece.

In addition, the Freeze collection includes a rectangular table with an aluminium top and four round coppers legs, and an all-aluminium side chair. All the pieces are available in a limited edition of 10 except for the chair, which is available in up to 35 pieces.

Also on display is an aluminium bookshelf made with conventional joinery, called the Rhythm Shelf, which is designed to hold books and magazines of varying thicknesses.

In addition, Cocksedge is showing a few pieces from his acrylic Slice collection, including a stool, bench, shelf and a large light fixture.

For the Slice series, Cocksedge heats and cuts acrylic blocks then allows gravity to bend the material into shape. The cuts also create a matte finish in the otherwise clear acrylic.

London-based designer Paul Cocksedge attended Sheffield Hallam University, receiving a BFA in Industrial Design. He later returned to London to study under Ron Arad, receiving an MA in Product Design from the Royal College of Art in 2002. Paul was introduced to Issey Miyake and Ingo Maurer, both of whom staged early exhibitions of his work. Maurer went so far as to give Paul a show within his own show at Milan Design Week 2003, introducing Styrene, NeON, and an early work that was later developed into Life 01 for Flos. Paul Cocksedge Studio was founded the same year.

Paul’s energy permeates his work from the design process and beyond. However all the pieces in his steadily expanding body of work are surprisingly distinct, in materials, form, and technologies employed. In regard to function, Paul was initially drawn to light, where he felt emancipated from the constraints of gravity. These suspended works include Styrene, NeON, Crystalized, Sapphire Light, Veil, and Light as Air.
.
.
.
.
.
.
.
source:paulcocksedgestudiocom
In Freeze, Cocksedge exploits freezing temperatures to create a seamless bond between metals that otherwise do not adhere in nature. The breakthrough in the series – a table of copper and aluminum – was made by first burying four copper legs in snow, leaving them to contract by 100th of a millimeter; second, excavating the legs and inserting them into holes cut into an aluminum slab where they were allowed to un-freeze back to ambient temperature thereby firmly locking into place in a strong, invisible join.

Further calibrating temperatures and tolerances of various shapes, forms, and metals, Cocksedge went on to create an entire body of exquisitely precise, balanced, and seemingly impossible works; each incorporating a stunning range of metals that appear to float together, magically.

Paul Cocksedge on his Freeze series: ‘What fascinates me here is that everything constantly expands and contracts, but imperceptibly. Everything from earth and water, to our own bodies and skins, even the universe itself. The pieces that make up Freeze are certainly large, heavy and solid, but that makes it all the more extraordinary that they are simply held up by an invisible join, ‘frozen together’ by forces we can’t even perceive’.