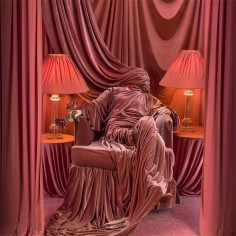 source:pattycarrollcom
Patty Carroll has been known for her use of highly intense, saturated color photographs since the 1970’s. Her most recent project, “Anonymous Women,” consists of a 3-part series of studio installations made for the camera, addressing women and their complicated relationships with domesticity. By camouflaging the figure in drapery and/or domestic objects, Carroll creates a dark and humorous game of hide-and-seek between her viewers and the Anonymous Woman. The photographs are published as a monograph, Anonymous Women, officially released in January, 2017 by Daylight Books.

The Anonymous Woman series has been exhibited internationally and has won multiple awards including Carroll being acknowledged as one of Photolucida’s “Top 50” in 2104. Her work has been featured in prestigious blogs and international magazines such as the Huffington Post, The Cut, Ain’t Bad Magazine, and BJP in Britain. Her work has been shown internationally in many one-person exhibits in China and Europe, as well as the USA. (White Box Museum, Beijing, Art Institute of Chicago, Royal Photographic Society, Bath, England, among others.) She has participated in over 100 group exhibitions nationally and internationally, and her work is included in many public and private collections. After teaching photography for many years, Carroll has enthusiastically returned to the studio in order to delight viewers with her playful critique of home and excess. She is currently Artist in Residence at Studios Inc. in Kansas City, Missouri.

Patty Carroll has her BFA from the University of Illinois, Champaign-Urbana in Graphic Design, and her Master of Science (MS) in Photography from the Institute of Design at IIT, Chicago. Since leaving graduate school, in 1972, she has taught photography continuously at the University level, both full and part-time. Carroll was Adjunct Full Professor at School of the Art Institute of Chicago until 2014, and previously taught at Columbia College in Chicago, The Institute of Design at IIT and the Royal College of Art in London, as well as other universities. Carroll is an Adobe Certified Instructor in Photoshop, and teaches for Ascend Training in Chicago. She has participated in numerous group and one-person exhibitions, and has work in several museums internationally. Her work has been shown at Schneider Gallery in Chicago. She is the photographic author of 5 books; Spirited Visions a book and exhibit of portraits of Chicago artists in 1992 with James Yood, Culture is Everywhere, published by Prestel in 2002 with Victor Margolin, and Living the Life: The World of Elvis Tribute Artists, 2005, and Man Bites Dog: Hot Dog Culture in America, with Bruce Kraig 2012, and the monograph of her series, Anonymous Woman, published by Daylight Books in 2016. Her work is also included in various Photography anthologies.

Selected one-person exhibits include “Are You Lonesome Tonight” at Royal Photographic Society in Bath, England in 1996, “Elvis?” at the Museum of Contemporary Photography, Chicago in 1999, and “Dark and Deadly: Photographs and Digital Movie Posters”, at The Art Institute of Chicago in 2004. Since 2010, her “Anonymous Women: Draped” series was shown at White Box Museum in Beijing, (2011) at Shanghai University Gallery (2010), several University galleries and museums, and at the Cultural Center in Chicago in 2012. In 2015, the series was exhibited at Zhejiang Art Museum in Hangzhou, China (2015,) The Photographers Association in Ningbo, China (2015), and Daura Gallery, in Lynchburg, Virginia (2014). She was the recipient of an Artist Fellowship Grant from the Illinois Arts Council in 2003, and has had various International artist residencies. She was one of the “Top 50” of Photolucida in 2014. The photographs have won various awards in international competitions, and been featured in various print magazines and online blogs, most importantly the Huffington Post, Feature Shoot, The British Journal of Photography, The Observer, Trendland, and The Cut among many others.
.
.
.
.
.
.
.
source:pattycarrollcom
In the latest narratives, “Demise,” the woman becomes the victim of domestic disasters. Her activities, obsessions and objects are overwhelming her. Her home has become a site of tragedy. The scenes of her heartbreaking end are loosely inspired by several sources including the game of clue, where murder occurs in one of five rooms of the house: Dining Room, Kitchen, Hall, Conservatory, and Library.
.
.
.
.
.
.
.
source:yellowtracecomau
In honour of International Women’s Day, we’re showing some love to American photographer Patty Carroll’s ongoing series Anonymous Women, which explores the dichotomy of domesticity, and what ‘the home’ means to different women. Carroll suggests that sometimes, home is a place of comfort, where being a ‘stay at home’ mother or wife is an aspirational lifestyle. Simultaneously, home can camouflage individual identity when a house-proud obsession with décor, presentation, and status dictates one’s sense of self. Carroll came to these realizations when decorating her own 1950’s ranch house, mulling over her own relationship to her home throughout vintage foraging sprees. In any and all cases, Carroll asserts that women need “a room of their own.” The series’ cross-cultural references span Renaissance-era draped statues, nuns in habits, women wearing the burka, priests and judge’s robes, ancient Greek and Roman dress, and the Virgin Mary among others.

Carroll’s sets are whimsical and highly stylised, each image distinct from the other. One anonymous woman sits languidly amongst a monochrome, muted violet room, covered by the same purple velvet that upholsters her chair, framed by crystal lamps; a ‘boudoir’ aesthetic. Another figure is shrouded and surrounded by bright, bold Moroccan rugs. The anonymous women are the only common thread between each image. The women are faceless, hidden, and therefore representative of any woman. They appear restrained, muffled, relaxed, cocooned; a lot lies with individual interpretation. But for all the potentially sinister meanings one could glean from the series, Carroll’s approach is far from brooding or depressive. Rather, she takes a wry approach, using humour to hint at bigger issues pertaining to womankind. The accompanying video series shows women attempting to complete household chores or everyday functions while burdened under the swaths of material, such as watering a plant or opening an umbrella. The women are almost entirely camouflaged amongst the home sets, reminiscent of being ‘part of the furniture’. Whether that’s a good or bad thing, Carroll leaves the viewer to decide.