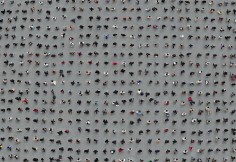 Adam Magyar is captivated by high-tech cities and man choosing to live an urban life. Magyar depicts the synergies of man and the city, and embraces the city as home to both man and technology. With each of his series, he observes time flowing by and life pulsating in front of his eyes. In his works, he scrutinizes the transience of life and man’s inherent urge to leave some trace behind. Magyar is keen on adopting and reinventing contemporary devices like industrial machine-vision cameras to be able to produce his unique cityscapes.

Adam Magyar (born 1972) is a Berlin-based Hungarian photographer. His works have been exhibited in various solo and group shows internationally including Helsinki Photography Biennial in Finland, MFAH Mixed Media event and the Graduate School of Design Harvard University in the USA, Berlin Selected Artists exhibitions in Germany, the Ethnographic Museum Budapest and Faur Zsofi Gallery in Hungary, Rhubarb Rhubarb in the UK and Karin Weber Gallery in Hong Kong. His works are present in the collections of Deutsche Bank, the Hong Kong Heritage Museum and the Bidwell Projects. His photographs have been published in the book In the Life of Cities by the Graduate School of Design Harvard University, Light and Lens by Robert Hirsch, and in photography magazines including PDN and PQ Magazine in the USA, Flash Art in Hungary, Digital Camera Magazine in UK and Katalog in Denmark.

While spending extensive time in cities like Tokyo, Hong Kong, Shanghai, Kolkata and New York, I was getting increasingly fascinated by man-made structures. I consider all man’s scientific achievements an integral part of human evolution. So, to me the city is not less of a natural environment than the rainforest. It is an ever-present human desire to go further and leave some trace behind in the fraction of the time we are given.
My drive is not different. I aim to grasp the devices at hand, push towards new frontiers by converting already existing technologies for photography in the hope of coming up with something new, a new device, a new language, a new frontier.

The factor of time is essential both in our private history and for humanity as a community. I am more interested in the drama of our own transience. In my works I capture man’s finite time in infinity. In my images I “stage” a situation where people are seen from a distance and I depict them as particles in a system. The observer of this scene is an imaginary person, looking at the whole as an outsider, as if being exempt from the laws of time.
I also perceive time and events taking place subjectively, consequently inappropriately. I find particular events more important than others, so I would instinctively emphasize them in my compositions. To eliminate this problem, I am experimenting with systems that relate to reality like watches and record series of events objectively. I build digital camera systems, adopt industrial machine-vision cameras and set up script-driven post processing methods.

In STAINLESS I scan rushing subway trains arriving to stations. The images record a number of tiny details of this moment. We see people staring towards their destinations standing at the doors framed by the sliding door windows. They are scrutinizing the uncertain future. Similarly to all my images, their main motivation is arrival. The darkness of the tunnels deep below the city turns these chemically clean mock-ups into fossils of our time.
URBAN FLOW is a study of quantifying motions and analyzing the rhythm of our environment. The outcome is an abstract transformation of reality. The technique I used for it is identical with that of photo-finish cameras used in the Olympic Games.
Making these images means constant data collection about life passing by in front of me. The photos taken this way are sections of infinite time flowing by relentlessly, like our own life spans.
Perspective and depth are missing from these photos, people are like beads on a string.  As if predestinated, they follow the same track, heading to the same destination.
SQUARES is a series of non-existent urban places. I created fake aerial photos and city vertigos by sequencing the same section of sidewalks and meticulously assembling collections of people.
.
.
.
.
.
.
.
.
source: popphoto

“I used to do street photography,” Adam Magyar says, “but my photos always revolved more around a theory of urban space than a single image. And so it occurred to me to make that theory an image.”

Magyar’s ideas about urbanity are what inspired this project, Squares. What appears to be a crowd of street traffic on a very large plaza is in fact a composite: It’s a single image made up of all the pedestrians who cross a small chunk of sidewalk during three 2-hour photo shoots. Each of the nine completed images is an extremely highresolution, massive file.

Printed, they span nearly 6×10 feet. But the best way to view them is on Magyar’s website (www.magyaradam.com), where, by moving across the screen with your mouse, you can use the cursor to automatically zoom in on each of the individual figures, as if you were looking through a telescope.

The 37-year-old graphic designer was inspired to make the images based on his own observations of the density and anonymity of city life. He came up with it while planning another project, Urban Flow— which also combines multiple images of pedestrians, but into very long panoramas.

Though based in Berlin, he traveled across the globe to tackle the project. “To get the right distance and perspective for the images,” he says, “I needed to photograph from about 13 to 16 feet overhead, and the best locations for this are pedestrian overpasses that look down on sidewalks.”

In his travels, he’d found that these were much more common in Shanghai and Hong Kong, which is where the photographs for these images were taken. He is currently working on one shot in New York.

The sidewalks Magyar was looking down on had to be relatively litter-free, so that the surface area would be homogenous enough to stitch together later. He used Google Earth for research, then, having made a list of sites, he visited each to gauge street traffic: “There had to be not too few nor too many pedestrians,” he says.

Shooting with a Canon EOS 5D and either a 50mm or 100mm lens, Magyar spent about 2 hours shooting at each location. He arrived just before or after midday for consistency of light, and stationed a tripod on the overpass—first shooting from the apex and then from other perspectives on the left and right of the overpass.

He would return to a location several times (at the same time of day and in the same weather), until he had about 1,000 total usable images.

Then came compositing the image, a complicated process that required writing custom scripts to use in Adobe Photoshop. First, he wrote a script to create an entirely new background for the figures to stand on, one that was large enough and high-resolution enough to accommodate all the figures he wanted to include—at least 300 and sometimes over 400. He separated multiple samples of bricks, and used his script “to randomly reorder them,” so that at no point were there any noticeable patterns other than the shape of the bricks themselves.

Once he’d assembled the background, Magyar wrote a second script to randomly reorder and position his figures across the new, huge background. Details such as the shadows of the figure are computer-generated and added later in 3-D software apps (he prefers not to say which ones).

“It was interesting to work on,” he says, “because when I look at the people walking in and out of the images, I think if I were one of these people I would be just a pedestrian, too.”
.
.
.
.
.
.
.
source: fotografiafacilisimo