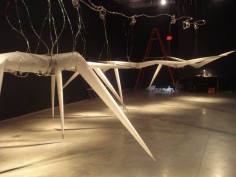 Chico MacMurtrie is internationally recognized for his large-scale, performative, kinetic installations, and interactive public sculpture. Chico MacMurtrie is the Artistic Director of Amorphic Robot Works (ARW), a collective he founded in 1991, consisting of artists, technicians and engineers. Currently operating out of Brooklyn, New York, ARW is dedicated to the study and creation of movement as it is expressed in anthropomorphic and abstract robotic forms.
Recent exhibitions include: Beall Center for Art and Technology, Irvine, CA (solo show 2011), Totemobile, Cultural Capital Bethune, France and Todays Art Festival Den Haag (2011), Birds, Richard L. Nelson Gallery / UC Davis, CA (2011). Geo Homsy, Chico MacMurtrie and Bill Washabaugh are the winners of the Climate Clock International competition in 2012. The scale model of Organograph, their proposed kinetic sculpture for the City of San Jose, CA, will be presented during the ZERO1 Biennial in 2012.
.
.
.
.
.
.
.
source: amorphicrobotworksorg

The valves composing the pneumatic joints in each of the Bird figures. Each valve is computer controlled to carefully regulate the air pressure in the various parts of the sculpture.

The vision system divides the floor into two vision activation areas. The first activation area monitors the central “river” area of the exhibit, and follows the rhythmic movements of the Birds. Each Bird’s personal space—the space it needs to survive—is monitored separately. The second vision activation area is the remainder of the gallery space surrounding the sculptural body of the exhibit. This image shows the areas monitored by the central cameras.
Artwork: Chico MacMurtrie

Simulation of cameras capturing the presence of visitors walking among the Birds.
Artwork: Chico MacMurtrie

In our prior work, the sculptural forms and the joints that connected and allowed for the sculptures’ movement were largely composed of metals. Although the designs allowed for significant strength and movement, the structures bore many limitations due to weight and rigidity. In a new generation of work, exemplified by Sixteen Birds, wood and metal are absent; forms instead arise from high-tensile, inflatable, fabric “skeletons” which are formless until inflated with air.

Since the structures more closely approximate the qualities of soft tissue, and with the “muscles” so smoothly integrated into the sculptural form that the viewer cannot tell where the inertia and momentum originate, the machines that result are capable of an astonishing natural elegance. Further, in interaction, and with the provision of enough environmental and internal sensors, a sculpture can move and interact with its audience and itself with a nearly proprioceptive self-awareness-allowing the work an uncanny portrayal of some of the qualities of a living system. More information on the materials and fabrication techniques used in this new line of work can be found on our Inflatables page under Current Directions.

In addition to the new Inflatable technology, Sixteen Birds also uses computer vision to interact with visitors, and relies upon a conduit or spinal core containing: compressed air, a vacuum, computer control and feedback cable, and the control lines for the vision system.

When the audience enters the room, the vision system keeps track of the number of humans in any given space. Carefully monitoring the visitors’ movements, the vision system provides the information needed to calculate the level of audience encroachment into the living space of each Bird. If a threshold of interference is exceeded, a new performative cycle is enacted for that Bird, which in turn further burdens the system as a whole, causing the entire exhibit to eventually spiral into decay.

Sixteen Birds represents our initial foray into new areas of robotics and interaction. Our new Inflatable technology is compelling because it conforms neither to standard conceptions of robotics, nor to existing understandings of kinetic sculpture, and gives rise to practically limitless potential for improvisational performance and interactive installation.