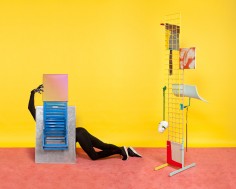 source: ffffffwalls
‘Body Without Organs.’ ‘Body Without Organs’ is an installation showcasing the material-based paintings of Sean Robert Fitzgerald alongside the playful unconventional sculptural work of Alex Da Corte. Together, the work is playful but the colors and materials combined create an eerie dream-like environment. We were able to talk with Sean and get his insight on working collaboratively on the show while simultaneously running a gallery space and curating shows. After our interview, we wondered around upstairs to the studio spaces where Sean’s own studio is located.

In Discussions
For the release of his new book, Mature Themes (Nightboat Books, 2014), writer Andrew Durbin has curated an evening of readings and performance with artists Harry Burke, Juliana Huxtable, and Jacolby Satterwhite. Artist Jesse Darling will also premiere a new short film.

A hybrid text of poetry and art criticism, Durbin’s Mature Themes is a memoir focused on the subject of disingenuity. The book explores what constitutes personal experience, both online and IRL (“In Real Life”), when to “go deep” and attempt meaningful connection with someone else in a culture of so many unreliable communications technologies is to resend an unanswered text at 3 a.m. Artist and novelist Chris Kraus writes, “Mature Themes negatively embraces media culture in its dizzying vortex of self-reflexivity, where facts exist only as powered by dreams, and dreams are in fact, malignant intent.” Throughout the book, Durbin’s voice mutates into other personae in order to uncover the fading specters of meaning buried under the pristine surfaces of art and Hollywood, searching their attendant star systems (interrelated in the various discourses struggling to shape both the present and the future) for the other realities that structure our experience of both.

Participant Biographies:
Harry Burke is a writer based in London. His forthcoming ebook of poetry, City of God, produced in collaboration with the architect Alessandro Bava, will be published by Version House in September 2014. Burke’s writing has been published by Rhizome, Mousse, and Arcadia Missa Publications, among others.

Jesse Darling is an artist currently living in London. Their work attempts to think about the human condition and how it is mediated through the structures, narratives, and technologies (architectural, [bio]political, social) that govern life as we know it, considering the social and physical body as a site where these structures manifest and become transformed. Darling also works in sculpture and installation and sometimes writes. Recent exhibitions include Preteen Gallery’s “It’s Been Four Years Since 2010” (2014) at Arcadia Missa, London, and “NOT LONG NOW” (2014) at Lima Zulu, London. Darling is represented by Arcadia Missa, London.

Andrew Durbin is a writer based in New York City and the author of Mature Themes (Nightboat Books, 2014) as well as several chapbooks, including Believers (Poor Claudia, 2013). He is a contributing editor to Mousse, where he writes frequently about art and technology. His writing has appeared in the Boston Review, BOMB, Fence, Triple Canopy, and elsewhere. Durbin coedits Wonder, a publisher of innovative writing, and curates the talk series at the Poetry Project.

Juliana Huxtable is a writer, artist, and DJ based in New York City. She is a member of House of Ladosha, a queer artist collective based in Brooklyn, and creator and resident DJ of SHOCK VALUE. She creates and speaks from the positions of cyborg, priestess, witch, and trans girl simultaneously. She is originally from Bryan–College Station, Texas, and graduated from Bard College. Her writing has appeared and been referenced in Artforum, Mousse, Maker magazine, and Garmento. She has read and performed at envoy enterprises, New York; Brooklyn Academy of Music; and Artists Space, New York.

Jacolby Satterwhite received a MFA from the University of Pennsylvania in 2010 and a BFA from Maryland Institute College of Art (MICA) in 2008; he completed a residency at Skowhegan School of Painting and Sculpture in 2009. In 2014, Satterwhite participated in the Whitney Biennial and New Frontier at the Sundance Film Festival. He has also participated in the museum exhibition “Radical Presence: Black Performance in Contemporary Art” (2014–15) at the Walker Art Center, Minneapolis, as well as three exhibitions at the Studio Museum in Harlem, New York: “When The Stars Begin to Fall: Imagination and the American South” (2014), “Fore” (2013), and “Shift: Projects | Perspectives | Directions” (2012). He has had solo shows at OHWOW Gallery, Los Angeles; Monya Rowe Gallery, New York; Recess, New York; and Mallorca Landings, Palme De Mallorca, Spain.