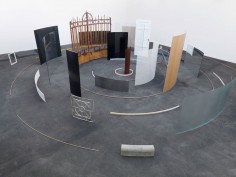 source: nytimes
Alicja Kwade, a cerebrally imaginative artist who lives in Berlin, produces elegantly understated works that are as much thought experiments as sculptures.
All of this invites us to ponder how closely our perceptual and cognitive habits conform to things as they truly are. Does anyone really know what time it is?
.
.
.
.
.
.
.
source: kunstmuseenkrefeldde
With her narrative-figural, at times minimal-purist objects and installations, Alicja Kwade subtly dislocates our perceptions of present-day reality. She takes our norms and the familiar things around us to the point of absurdity by playfully combining everyday objects, or altering, mirroring and multiplying their forms and materials. Weights from old grandfather clocks appear in their dozens and distort the space – and summon up a both symbolic and physical sense of temporality; illuminated globe lamps reflect in a labyrinth of glass panes and suspend the differences between body and anti-body, between reality and illusion. With her works and interventions, Alicja Kwade unhinges our deep-seated mental framework. She infuses our world with a ‘twisted’ objecthood.
Alicja Kwade was born in 1979 in Katowice, Poland, and studied from 1999 to 2005 at the Universität der Künste in Berlin. She currently lives and works in Berlin.
.
.
.
.
.
.
.
source: artsynet
Alicja Kwade’s mixed-media works manipulate mental perceptions and physical experiences of how the body inhabits space and time. Kwade frequently uses imperfect doubling, mirror images, and repetition in her practice. For example, Dimension +1-+9 (2012) and Dimension -1–9 (2012) are a pair of clocks ticking just faster and slower than one second; Nissan (Parallelwelt 1 + 2) (2009) features two Nissan cars as mirror images, including topical scratches. Her common materials include items found in everyday life—like coins, metal pipes, mirrors, glass, lights, and bicycles—that she then distorts to create sensory illusions. The results, sometimes slouching or stretching, can appear anthropomorphic. A recent installation Durchbruch durch Schwäche (Breakthrough Through Weakness) (2011), comprised of over 300 clock weights, was based on the closing sequence of Christopher Nolan’s 2010 film Inception.

source:art-agenda
Alicja Kwade’s “In Circles”
Kimberly Bradley
“Round and round she goes; where she stops, nobody knows.” This little rhyme popped into my mind as I entered Johann König’s gallery for Alicja Kwade’s current solo show, “In Circles.” A mad array of 54 industrial and everyday objects loosely arranged in concentric rings fills the gallery’s front space in a large-scale installation titled Die Gesamtheit aller Orte (2012), which beckons to the viewer walk along each ring to see what he or she can see.

It’s easy to trace the curves in Kwade’s perfectly placed bent tubing and piping, but it takes a second to realize that even the installation’s larger, solid objects—a door, a window, mirrors, iron gates, sheets of metal, and even a bicycle—not only travel on her orbits’ paths, but have also been altered (in some cases just barely) to conform to them. The white door’s slight curvature is hardly noticeable until you’re at close range. The imposing rusty gates are generously rounded. There’s an almost imperceptible bend to a door with an oval mirror. A few copper pipes in the outermost rings disappear into the gallery wall; in the very center of the installation, a two-euro coin, propped up on its rim, and a sharply curved sheet of metal face each other, mysteriously.

Die Gesamtheit aller Orte loosely translates into “the entirety of all places,” but Kwade spans eras and movements here, too. She deftly cherry-picks art-historical references, connecting to a Duchampian concept of the Readymade, or even Surrealism—her curved mirrors are a subtler take on the very bent mirrors (which might be echoes of Salvador Dalí’s melting clocks) that she has shown in previous exhibitions, such as Andere Bedingdungen in 2009. Some of the sheets of curved metal look like flimsier, Ikea-esque versions of Richard Serra’s giant sculptures. Encircled by a round ring of wood, the two-euro coin in the middle of this constellation also makes anyone familiar with the Polish-born, Berlin-educated Kwade’s prior work wonder whether she’s again playing with concepts of value and perception: especially in her 2008 solo exhibition “Von Explosion zu Ikonen” at the Hamburger Bahnhof under the auspices of winning the Piepenbrock Prize for Sculpture—Kwade had cut simple shale into faceted objects resembling precious stones or applied gold leaf to briquettes of coal to transform them into something that only looksrich.

This time, though, what seems most important are not the objects themselves or even what the artist has done to them, but the alternate world she has created with them. Her neatly arranged distortions of the quotidian are like a found-object bizarro-world solar system, a Berlin-bohemian crop circle or labyrinth, like in Alice’s Wonderland. For all its illusion and effect (how did she get that door to bend like that?), the installation evokes a sense of mild discomfort … and, like so much these days in the art world and beyond, takes up Freud’s concept (via psychoanalyst Ernst Jentsch) of das Unheimliche, or the Uncanny—”the opposite of what is familiar”; something that both attracts and repels.

On the other hand, it could very well be that it doesn’t run that deep. Maybe poking at our brains while making us walk in circles might be all that Kwade wants to do with us. The installation definitely draws its viewers in, but it might be even more unsettling—and arguably more intriguing— if Kwade had taken a more minimal route: rather than having things so neatly traced out, literally, on the floor, what if she’d given us fewer breadcrumbs? What she’d lose in centripetal force, she’d gain in singular impact. (It so often seems that current younger artists are almost afraid of giving the viewer too much to figure out or “do.” Is this to make sure everyone… “gets it”?)

More mysterious is Kwade’s single-channel video Kreisel (Inception) (2012), playing in the gallery’s back space on a simple black monitor set on the floor. The space is otherwise empty. The video shows a heavy metal top spinning slowly on a black background, reflecting a single light source and underscored with a loud buzz that stops only when the loop stops for a moment and starts again. The top never decelerates enough to topple over. What does it mean? Round and round we go, but maybe it’s really about the spinning itself, and not guessing where things might stop. Don’t think, just watch. As Robert Storr recently said in reference to Ellsworth Kelly—yet another artist who surprises us with almost imperceptible, unsettling curvatures in his sculptures and paintings—”[…] there is no message, only experience.”