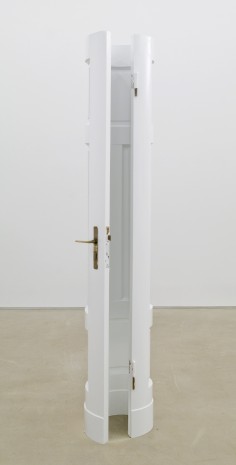 source: nytimes
Alicja Kwade, a cerebrally imaginative artist who lives in Berlin, produces elegantly understated works that are as much thought experiments as sculptures.
All of this invites us to ponder how closely our perceptual and cognitive habits conform to things as they truly are. Does anyone really know what time it is?
.
.
.
.
.
.
.
source: kunstmuseenkrefeldde
With her narrative-figural, at times minimal-purist objects and installations, Alicja Kwade subtly dislocates our perceptions of present-day reality. She takes our norms and the familiar things around us to the point of absurdity by playfully combining everyday objects, or altering, mirroring and multiplying their forms and materials. Weights from old grandfather clocks appear in their dozens and distort the space – and summon up a both symbolic and physical sense of temporality; illuminated globe lamps reflect in a labyrinth of glass panes and suspend the differences between body and anti-body, between reality and illusion. With her works and interventions, Alicja Kwade unhinges our deep-seated mental framework. She infuses our world with a ‘twisted’ objecthood.
Alicja Kwade was born in 1979 in Katowice, Poland, and studied from 1999 to 2005 at the Universität der Künste in Berlin. She currently lives and works in Berlin.
.
.
.
.
.
.
.
source: artsynet
Alicja Kwade’s mixed-media works manipulate mental perceptions and physical experiences of how the body inhabits space and time. Kwade frequently uses imperfect doubling, mirror images, and repetition in her practice. For example, Dimension +1-+9 (2012) and Dimension -1–9 (2012) are a pair of clocks ticking just faster and slower than one second; Nissan (Parallelwelt 1 + 2) (2009) features two Nissan cars as mirror images, including topical scratches. Her common materials include items found in everyday life—like coins, metal pipes, mirrors, glass, lights, and bicycles—that she then distorts to create sensory illusions. The results, sometimes slouching or stretching, can appear anthropomorphic. A recent installation Durchbruch durch Schwäche (Breakthrough Through Weakness) (2011), comprised of over 300 clock weights, was based on the closing sequence of Christopher Nolan’s 2010 film Inception.