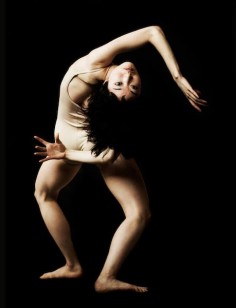 The modesty in her presence is reflected in her new work, their first full evening presentation. Miller takes a seat behind me and utters barely perceptible gasps and murmurs that coincide with the performance. The dancers move with an angular fragility that reminds me of eager fledglings on the brink flight—always in danger of not quite catching themselves before they fall. The live accompaniment no doubt, is supporting my imagination with sounds of birds in a forest. The sample of the ensemble piece that I viewed displayed a lot of the outrageously full-bodied commitment of Batsheva Dance Company where Miller danced for a couple of years, though Miller’s artistry is graced with something more intimate: full disclosure. Some movement exchanges are like watching twins share a unique language or two lovers sharing a private joke. I was a bit surprised to see work of this emotional depth and technical maturity from such a young company and choreographer–young, but not inexperienced. Miller has been busy setting work on prestigious companies and winning awards for a while now. After a break between sections Miller has this to say:

“This space is something that I’ve wished for the company since we started. I felt instinctively that I wanted to have a dance company that was a family of artists, of collaborators who would develop a language and learn lessons with each other- each step of the way… With each performance, with each piece, I hope we can take our language, our questions, the things that go unanswered and develop them into our next work.”

She then speaks about how intimidated she was to approach some of the talented dancers who are part of her company now. Here again, Miller exposes her soft underbelly, just as her performers have done in the showing.

How apt that Gallim’s new work, based on the myth of Sisyphus, was made in a church – a place where movement from the soul is worshiped and vulnerability is a religion.
.
.
.
.
.
.
.
.
source: kingsburyhall

Honored for “movement innovation” at a 2012 TEDx Conference, Gallim Dance has captured the attention of the dance community with its visceral movement, resonant imagery, and award-winning ensemble of dancers. Founded by Utah native Andrea Miller, the company’s work embodies fearless physicality, grounded by deep humanity and expressed through the madness and joy of the imagination.

The visit includes a two-week residency with the Department of Modern Dance during which a repertory work will be set on the U dancers.

Performances at Marriott Center for Dance

Gallim will be performing Blush, which was developed at Jacob’s Pillow in 2009 and premiered at Joyce SoHo. Blush expands the sudden moment of blushing into a sixty-minute flood. Dense with emotional rawness and physical exertion, this visceral work chases one of the most elusive human expressions – the blush – through the stress and raptures as it melts to the edges of the skin. Since its 2009 premiere, Blush has toured nationally and internationally to the highest critical acclaim, and received the 2011 National Dance Project Touring Award.
.
.
.
.
.
.
.
.
source: gallimdance

Andrea Miller, choreographer and artistic director of Gallim Dance, founded the company in 2007. In a 2013 Crain’s New York article, Miller was called “one of a handful of rising-star choreographers who, dance experts say, are shaping this generation of the art form”.

In collaboration with visual artists and company members, Miller has dedicated herself to the creation of challenging new works for Gallim’s growing repertory – including nationally and internationally acclaimed pieces such as Fold Here (2013), Sit, Kneel, Stand (2012), Mama Call (2012), For Glenn Gould (2011), Wonderland (2010), Blush (2009) and I Can See Myself in Your Pupil (2008). Miller’s work has been commissioned throughout the world and includes recent commissions with VOGUE Diaries featuring model Kate Upton, choreography for the upcoming film The Life and Death of Mick Rock (2013) created to original music by The Flaming Lips; In Medias Res (2012) for The Nederlands Dans Theater 2; Howl (2010) presented at the Royal Opera House of London; For Play (2012) for Bern Ballett; and choreography for Phantom Limb’s production 69° South for BAM’s Next Wave (2011). From 2009 to 2011, Miller served as associate choreographer of Noord Nederlandse Dans, creating two works for the company.

Miller is a founding collaborator of Movement Invention Program – a program dedicated to the research of improvisation. She is also resident choreographer at Dancewave, a Brooklyn-based pre-professional dance program, and teaches master classes, workshops and has been commissioned by many universities, including Harvard University, The Juilliard School, Barnard College at Columbia University, New York University, University of Utah, and Wesleyan University.

Founded by choreographer Andrea Miller, Gallim Dance burst onto the New York dance scene in 2007 and immediately caught the attention of the New York dance community. The company includes an ensemble of dancers hailed for their quick wit and technical virtuosity. The mission of Gallim Dance is to play inside the imagination, to find juxtapositions of the mind and body that resonate in the soul, to investigate our limitations and pleasures, and to realize the endless human capacity for inspiration. Miller’s works are expressions of the self and its inner mosaic of weakness, desires, and struggles. Her use of extreme physicality – movement that shifts between explosive power and contained tension – creates an experience where the dancers appear to exist at the edge of their limits. Choreographer Andrea Miller, originally from Salt Lake City, Utah, is a graduate of the Juilliard School, and former dancer with Ohad Naharin’s Ensemble Batsheva, Cedar Lake Contemporary Ballet, The Limon Dance Company, and Buglisi Dance Theater. Her work has been commissioned and performed throughout the United States, Canada, and Israel. Miller has been selected as one of Dance Magazine’s “25 to Watch” (January 2009).