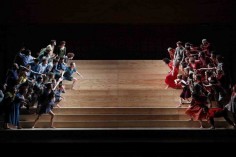 Filmed at the Melbourne International Arts Festival 2011, dance, theatre and opera collide in this epic piece with over 60 performers coming together from Melbourne’s Chunky Move dance company and Victorian Opera, creating what is being called a ‘lovechild of an unprecedented partnership’. Devised by Gideon Obarzanek in his final piece for Chunky Move, along with conductor Richard Gill.
.
.
.
.
.
.
.
.
source: chunkymove

One of Australia’s greatest choreographers, Gideon Obarzanek, presents his final work as head of Chunky Move with Assembly.

Devised by Obarzanek in partnership with Music Director Richard Gill (Victorian Opera), Assembly investigates the enigmatic motion of crowds. Integrating dance with theatrical and operatic performance, this grand piece involves over sixty performers on stage – with the entire cast choreographed into an awesome mixture of movement and voice. As striking patterns evolve from chaotic rabbles, musical harmony emerges from dissonant voices. Combining the force and agility of Chunky Move’s dancers with waves of choral music, ranging in source from ancient to contemporary, Assembly’s action shifts between mesmeric visualisations of crystalline order and the unpredictable clamour of the seething mob.

Obarzanek has been acclaimed for his use of technology and stagecraft to create crossdisciplinary works that push at the borders of dance performance. Assembly sees him return to a more stripped-back approach for this powerful exploration of our role as individuals in the human throng. The lovechild of an unprecedented partnership between two premier companies, Assembly is a historic work on an epic scale.

Founded by Artistic Director Gideon Obarzanek in 1995, Chunky Move has earned an enviable reputation for producing a distinct yet unpredictable brand of genre-defying dance performance.

Chunky Move’s work constantly seeks to redefine what is or what can be contemporary dance within an ever-evolving Australian culture. The company’s work is both diverse in form and content; to date the company has created a number of works for the stage, site specific, new-media and installation work.

In July 2012, Chunky Move entered a new period of artistic leadership under the guidance of Artistic Director, Anouk van Dijk. Van Dijk is an internationally acclaimed choreographer whose work has toured extensively throughout Europe, North America, Asia and Australia. Her work attracts broad audiences through an approach, which is daring, innovative and unpredictable in both its mode and context.

In 2008 Chunky Move received Best Dance Work for Glow and Best Visual or Physical Theatre Production for Mortal Engine at the Live Performance Australia Helpmann Awards. In 2009, Mortal Engine received an Honorary Mention in the Prix Ars Electronica awards in the Hybrid Arts category. In 2011, Chunky Move was the recipient of two Green Room awards for their production, Assembly. An Act of Now, Chunky Move’s debut work with Anouk van Dijk, was awarded the Age Critics Award for Best New Australian Production at the Melbourne Festival in October 2012.
Recent works include: 247 Days, An Act of Now and Assembly
.
.
.
.
.
.
.
.
source: danceinforma

Chunky Move with Artistic Director Gideon Obarzanek participated in the Sydney Festival 2012 with Assembly – a work exploring the dynamics of crowds in everyday life. Obarzanek’s fascination with ‘spatial and moving patterns’ is creatively worked through on a set of steep stairs, mirroring the sloped seating of the watching audience so that we come face to face with the facets and behaviour of various crowds. While crowds in their various shapes and forms may be an unavoidable part of modern life, Obarzanek reminds us of their intricacies, uniqueness and creative force. Assembly, as the name of the work, reflects the vision to assemble something en masse that transcends our individuality. Obarzanek’s assembly of various dancers and choristers, integrating voices and movement into a harmonious whole is the highlight of this work. Dancers from Chunky Move collaborate with singers from the Sydney Philharmonia choirs to explore the way a crowd affects individuals as well as creating a life of its own.
Unexpectedly and refreshingly, Obarzanek does not delineate the dancers from the singers – the variety of ages, body types and ways of moving endears the audience to this ‘crowd’ and somehow includes us in the process.
As 60 performers climb the stairway, set to take their opening position, a question is nagging – “But where will the dancers dance?” Then they all start talking loudly, gesticulating as if they were all telling you their life story. It’s not until the mass separates and walks purposely in intricate and highly structured patterns up and down and across the structure that we realise the dancers are lost in the anonymity of the crowd. Seamless integration of voice and body allows Assembly to explore the many types of crowds in modern life, from raucous football games to audience participation, to queuing, trend-following and the alienation of cityscape bustling. In this work the standout performance is no particular individual but the group entity itself. The space is well-used and has the ability to show the depth and shape of crowds. We see the ebb and flow, creating an almost 3D effect. We no longer see the crowd as a chaotic mess but rather as one mass, constantly forming and reforming patterns as the individuals interact and disperse – an embodiment of a creative entity that is greater than the sum of its parts. The choir must be applauded for their absolute commitment to their roles not as singers but as performers, executing phase-shifting sequences as well as rolling and slithering head-first down the stairs. Equally, the Chunky Move dancers handle the challenges of shoulder rolls and pas de deux sequences on a stairway with skilled control as well as performing percussive and resonating falls due to the pushing and shoving nature of crowds. The combination of mass bodies in motion with voices singing in unison is a masterstroke of creative envisioning, allowing the work to capture the contradictory experience of the crowd or assembly. The anonymity and earthbound nature of the dancing bodies is contrasted with the ethereal quality of the voices that suggest a juxtaposition of mind/matter and subjection/transcendence, as well as the themes of fragmentation and wholeness. Assembly is an uplifting and refreshing collaboration that engages the audience, elicits laughter, spontaneous applause and recognition. Echoing a review from The Age, Assembly is “meditative, mesmerising and existential”, and extremely rewarding.