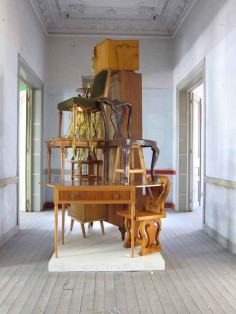 Andreas Angelidakis is an architect working at the intersection of digital culture and architectural production. In these parallel realities, Angelidakis treats the internet as a place where ideas are born and get tested, where new social behaviors define the way our society will develop in years to come. By assuming the role of architect inside online communities such as Second Life, and closely watching the development of technology’s effect on our understanding of the world, he has developed an architecture that responds to the habits and particularities of the oncoming generation of citizens that grows up inside social networking sites like MySpace and Facebook.

In between the internet and real life, Angelidakis has for a long time worked in the field of contemporary art, and it is this work which forms a bridge between different realities, between experimentation and implementation, between ideas and buildings.

These experiments always have a real life counterpart, as Angelidakis firmly keeps a base in both worlds, transferring the ideas from the internet to exhibition and installation design, furniture, urban planning, public space and, most recently, housing developments, always treating the client as a partner who is crucial to the project’s success.