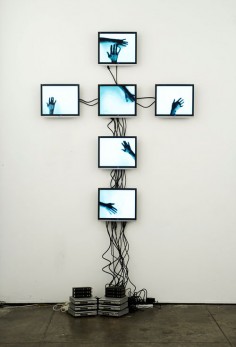 Besides intercourse (when the Image-repertoire goes to the devil), there is that other embrace, which is a motionless cradling: we are enchanted, bewitched: we are in the realm of sleep, without sleeping: we are within the voluptuous infantilism of sleepiness: this is the moment or telling stories, the moment of the voice which takes me, siderates me, this is the return to the mother (“In the loving calm of your arms,” says a poem set to music by Duparc). In this companionable incest, everything is suspended: time, law, prohibition: nothing is exhausted, nothing is wanted: all desires are abolished, for they seem definitively fulfilled. (Roland Barthes, A Lover’s Discourse, 1978)

In the recent exhibition Exile of the Imaginary, curator Juli Carson approached Roland Barth’s A Lover’s Discourse: Fragments almost as a holy grail – as a fragment of a mythical forgotten discourse in critical theory. The text, written as an act of love, a how-to manual and in stoic, reflective isolation, had great implications for Carson. To her, the artist’s act of making has the potential as an act of love. This act does not necessarily project ‘love’ outward as a lover’s embrace, toward the viewer or any other object of affection, but, more significantly the act of love in art making constitutes an internalisation of a specific object or point of reference in the world within the artist’s sphere of self. To the artist, this ritual, like an act of transference, redirects displaced psychic energy onto a specific object, making that object his or her own. In this way the ritual becomes part of what it means for the artist to live.

But Desperately trying to tell you something…. is most definitely about speaking – the projection of a voice. Speaking about love is difficult, it amplifies the very problems of speech – of meaning, desire and understanding. Barthes also reflects on a more forceful kind of love, “So it is a lover who speaks and says… I am engulfed, I succumb…”. But as we have already seen this is not the only kind of love. When one approaches these problems one might sense that it might be best to learn to love these difficulties, as pursing a ‘pure’ state of meaning or understanding might lead one to an absurd situation where words begin to parody their own existence. Both of the artists in this exhibition have chosen to show to us their transferences, those objects in the world that have become ritualised and internalised through their art practices.

Speaking about love is next to the act of making. That is to say that to speak about love is to beg the question of what to do about it. Both of the artists in this exhibition keep a distinguished physical trace of the act of making, both artists have taken steps to resolve the question of how to deal physically with the art-as-love act. The Performance Stains (Black) series by Ben Terakes serve as maps to events in which the artist has chosen to internalise a specific materiality and to speak with the body. Other ‘specific objects’ chosen by the artist include the fragments of narratives in the The Embodied Works: an architectural interior of distinct or perhaps distant memory, movements of bodies known or perhaps unknown – all these things again are ritualised through a performative trace of the artist at work.

In Andrew Newman’s Attempt to fill an empty space (Performance Anxiety) the performative trace of the artist also has a commanding role within the visuality of the art event. The work’s title and sense of urgency heighten the viewer’s awareness that despite diligent efforts, in speaking about love, words might hang in the air differently to other kinds of speech. Words of love might be thick and heavy and like a lover’s embrace, suspend notions of time and law.

In a further twist, the thing that Newman has chosen to internalise as a catalyst for artistic production is the act of making love itself. Thus we are presented with a scene where Newman internalises the act of love-making (or more accurately, the moments before it) meditates on it as an act of love, then presents it to us to speak about love.

We can say therefore that the works in this exhibition move in two directions, the first being the act of love as transference – the taking in of something from outside the self as a ritual to actualise and define the self. The second directional ‘flow’ in this exhibition moves out toward the viewer, an act which tells something – but not everything – of what the world and the things in it mean to the artist. Both artists choose to speak physically – they have made things as acts of love – and have explored the virtue of things which cannot be represented in any manner of speaking at all.

Andrew Newman is an artist and researcher. His performative art practice poetically utilises methodologies from the communication sciences to examine value construction in contemporary culture. He is currently researching the application of Joseph Beuys’ concept of social sculpture to economic markets and is exploring the existential elements of the economic theory of Andre Gorz.

Newman completed a MFA under Ryszard Dabek and John Conomos at the Sydney College of the Arts, exploring the application of Roland Barthe’s notion of pothos, the desire for the absent being, to televisual art practice. He has studied experimental media under German filmmaker Karl Kels at the Universität der Künste, Berlin and journalism and communication at the University of Technology in Sydney and the University of Hamburg. He has had his work exhibited in Sydney, Berlin and Tokyo.
.
.
.
.
.
.
.
source: transmedialede

Andrew Newman is an artist and researcher based between Sydney and Vienna. His performative art practice poetically utilises methodologies from the communication sciences to examine value construction in contemporary culture. Newman is editor of the journal for research cultures (JRC) and is currently investigating immaterial economics as a PhD candidate at the National Institute for Experimental Arts in Sydney. He has been a director of Runway Journal for Australian Experimental Art since the first online issue Prototype launched in 2013. Newman is head of the ‘Austria Australia Arts Alliance’ which creates an exchange of experimental art positions between Austrian and Australian researchers and artists.