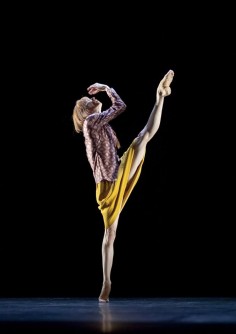 A BALLERINA’S career path is usually predictable. She rises through the ranks of a company, dances principal roles, perhaps performs occasionally with other troupes as a guest artist. If she is lucky — not too many injuries, a resilient body, the right temperament — she may keep dancing into her 40s, carefully tailoring her repertory to her inevitably declining physical capacities.

And then there is Sylvie Guillem.

Ms. Guillem, 47, whose program “6000 Miles Away,” presented by the Joyce Theater, will open on Wednesday at the David H. Koch Theater at Lincoln Center, is the stuff of ballet legend. Her steely technique and extraordinary physique — impossibly long, lean and flexible, her cambered feet like prehensile tools — were being talked about even while she was still a student at the Paris Opera Ballet School. When she joined the Paris Opera Ballet in 1981, at 16, she was an almost instant star, a title (“étoile”) officially bestowed upon her by Rudolf Nureyev, the company director, just three years later.

To the shock of the dance world she left the company at 23, citing a desire for more independence, and moved to the Royal Ballet as a principal guest artist. Unlike almost any other ballet dancer — only Mikhail Baryshnikov, and to some extent Nureyev, come to mind — she not only went on to have a superstar career as an interpreter of the classics but also made an apparently effortless transition into works by contemporary choreographers while remaining a big-name box-office draw.

“I don’t think anyone else could do what she has done,” said Brigitte Lefèvre, director of the Paris Opera Ballet. “She has incredible physical and mental strength, and a great deal of courage to put herself out there. The audience appreciates that. She has great choreographers who create work for her, but the public really just wants to see Sylvie Guillem.”

Ms. Guillem’s physical powers seem as tremendous as they were a decade ago. Last year she danced the title role of Kenneth MacMillan’s “Manon” at La Scala to rapturous acclaim; since the July premiere of “6000 Miles” she has been touring with the program, which features demanding works created for her by William Forsythe and Mats Ek. (An extract from Jiri Kylian’s “27’52,” danced by Aurélie Cayla and Lukas Timulak, is also on the program.)

What keeps her going? “For me it is all about pleasure,” Ms. Guillem (pronounced GHEE-lem) said, speaking in fluent English at her Paris hotel. “It is impossible for me to do something without believing in it, enjoying it fully.”

She looked a lot smaller in person than onstage. She was dressed in a long white shirt over dark pants. Her elegant, elongated limbs were camouflaged, and her pale, makeup-free face seemed girlish. She was friendly and articulate, a far cry from the divalike portrait frequently painted by the news media. “I think it was much more difficult for her as a woman to be someone who knew her own mind and spoke it,” Mr. Forsythe said in a telephone interview. “What I really object to is the nickname, ‘Mademoiselle Non,’ that she was given while at the Royal Ballet. It was a way of undermining her, of turning her into a petulant diva who wouldn’t threaten an institution.”

Mr. Forsythe first met Ms. Guillem in 1983, when she was a shy 18-year-old whom he cast in his first work for the Paris Opera, “France/Dance.” Four years later he would create “In the Middle, Somewhat Elevated” for Ms. Guillem and a number of other brilliant young dancers. The piece, which took ballet technique to thrilling extremes, seemed to present a new kind of dancer: fiercely contemporary in approach, utterly real onstage.

It was a way of dancing that perfectly suited Ms. Guillem, who said she didn’t grow up with “the little girl’s fantasy of the tutu and the tiara.” But she seemed surprised when asked whether she was aware of how exceptional her career has been. “If I was aware of it, I’d have to compare myself to others, and I don’t do that,” she said. “I have always just said to myself, I’d like to do this, I’d like to meet this person, and I do it.”

At the Paris Opera “it was always a fight,” she said. “I had a kind of realistic way of being onstage. I didn’t like the fakeness, the conventions of ballet, the things people did without thought because they had always been done that way.”

Ms. Guillem’s desire to make her own decisions, alongside a perpetual hunger to learn, have been the driving forces of her career. Even while dancing the classics all over the world, she was constantly looking for choreographers to work with. “Maybe I still had the reputation of a classical ballerina, doing this,” she said, snapping her fingers imperiously. “But at first it was hard to convince people I was serious.”

In 1996 Ms. Guillem commissioned work from the little-known Jonathan Burrows and Mr. Ek for a film, “Blue Smoke,” and went on to create pieces with Maurice Béjart and David Kern, showing her uncanny ability to integrate widely divergent styles. In 2006 Russell Maliphant choreographed “Push” for her, and that same year she became an associate artist at Sadler’s Wells, later creating works with Robert Lepage and Akram Khan.

“With these choreographers I have felt: I want to be part of that,” she said, “to know what it is, experience it physically and mentally. Trying to absorb different styles is not a challenge, it’s a curiosity.”

“Sylvie understood what her talent represented, and she was able to transform that into autonomy,” Mr. Forsythe said. “And she has served as a model. Now other ballerinas, like Diana Vishneva, are doing what she did.”

Ms. Guillem, however, said she never had a plan. She likened her approach to Mr. Forsythe’s choreography: “There is a frame, but you use your instinct.”
.
.
.
.
.
.
.
source: yourartasia