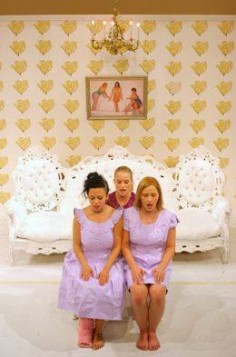 source: offoffoff
In Ann Liv Young’s unadulterated spew of venom Michael, nakedness is no longer vulnerable, love is not anyone’s ideal, sex is not an act of communication, and relationships offer no moral support through the darkness of life. In this sociopathic fantasy of nihilistic trailer trash, through a series of linked vignettes, the audience is assaulted by the vacant relationships of six women and one man. They speak with vigor about incest, murder, suicide, sex, and violence with no human emotion. Mostly naked, and aggressively unselfconscious, the performers soon inure us to the meaning of the body: not only to its taboos, but also to its beauty. In fact the naked body becomes ugly, (the beautiful bodies of the performers notwithstanding), a vehicle for meanness and little else.

We have evolved beyond the taboo breaking Judson era and the conceptual “fuck you” to the art world is not art unto itself anymore. There also needs to be some raison d’etre beyond showing the darkness of the world. The best art asks a complex question, or proffers a daring answer. This does neither. Nevertheless, Young has become something of a cult figure in the performance art world of late; she is unforgiving, seems to have no consideration for what the audience thinks, and will put anything onstage.

On a technical level, the spatial relationships and tempo never waver; the unison provides no contrast or resistance between the characters. The show suffers from a flat line of inertia, though the base line is manic. The energy level of the first dangerous, explosive image — a naked woman in a pink knee-high cast dances violently to ear piercing popular music — is consistent throughout the work. It never shifts or breaks open into something new or revelatory except the taste of what’s inside Young’s head. Some will find a statement in watching someone do something you are “not allowed to do,” especially in light of the recent political climate and the issues of censorship inherent in current legislation.

The best art asks a complex question, or proffers a daring answer. This does neither. Regardless, the clearly defined, strongly performed statement stays with you.

Undoubtedly, this piece was difficult to create. The rigor of the unison text (often two or more people speaking rhythmically and simultaneously) cannot be underestimated, and the bravery of the performers is not something that comes overnight or to all. The performers are all devoted, intense, dogmatic and committed and the direction, though one can certainly question its efficacy, is clear and forceful. There are no doubts about point of view or intention. The doubts come around the topic of purpose, and that extends to the purpose of art. Depending on what your answer is to that question you may LOVE this work. Regardless, the clearly defined, strongly performed statement stays with you. That may be success unto itself.
.
.
.
.
.
.
.
source: brooklynrailorg
Ann Liv Young’s “Michael” is an interdisciplinary exploration of the hyper-real, which defies categorization as anything other than “performance art.” By juxtaposing the natural and theatrical, the private and public, the mundane and the over-the-top, Young complicates the relationship between audience and performer, obscuring the boundaries between the two, thereby questioning the limits between “life” and “art.” Executed in a fast-paced, feverish state of excitement, “Michael” is a veritable forty-five minute abduction that leaves the audience breathless, dazed, disoriented, at least a little bit uncomfortable, and, to be honest, in desperate need of a shower.

As the theater doors open, the set, a kitschy, life-sized diorama of a 42-foot long trailer, is in full view. (In an interview with DTW’s Cathy Edwards, Young explains that this pedestrian spatiality is at the crux of her work—she holds all rehearsals in her Brooklyn apartment.) The trailer’s white and yellow floral wallpaper is the most striking part of the set décor; it was inspired by Young’s mother’s domestic aesthetic. A refrigerator filled with coke sits stage left. The trailer’s skinny door and a window sealed with duct-taped plastic serve as portals between on and off-stage. Center stage, a boudoir picture of four of the female performers hangs above a Victorian-style, pasty white couch. Young curled in fetal position lies on a white drop-leaf coffee table in front of the couch. A woman clad in the same paper-mache-style of the couch, dangles from the rafters on a tire swing. As I found my seat, I felt like a voyeur.

“Michael” begins full-throttle with Eminem’s “Crazy in Love,” vocally accompanied by the character who personifies the corruption between the worlds of “real-life” and “art,” by role shifting between audience member, stage manager (often shouting directives from her seat), and on-stage performer. Young flails around the set in a state of frantic, self-satisfying ecstasy, adorned in a pair of see-through white panties, a pink cast on her ankle, and a bloody bandage that falls off almost immediately. Three more women, identically un-dressed, pop out from behind the couch and “stripper” dance on the furniture. Meanwhile, Duerkenson, the cast’s only male, appears behind the window, watching, masturbating, and, eventually, well, ejaculating.

During the performance, I was captivated by the honest, and therefore beautiful ugliness of it all. The off-white floor, dirty and scuff-marked, mirrored the well-worn quality of the dancers’ naked bodies. Painfully lit by a glaring sea of white lights, the performers were bruised and covered in floor burns, their skin increasingly splotched by the performance throughout the night. Aside from the few self-referential moments when the performers broke the fourth wall, questioning the nature of the performance itself—concluding, this is art, and art is life—they didn’t seem aware of the audience at all. This sense of obliviousness was reminiscent of what one might do when alone and restless, in the forgiving privacy of one’s own home.

While “Michael” was not boring, I felt the performance revealed a certain amount of disdain toward the audience. An obvious expression of this hostility was when one performer screams “fuck you” at the audience for not applauding. The show’s finale, an acappella rendition of “Over the Rainbow,” added to this notion of disregard. While I enjoyed the ambiguous and almost accidental nature of its conclusion, Duerkenson holding the last note until he runs out of breath, followed by the stage manager’s declaration of “The End,” I felt that the performers’ departure from the stage without acknowledging the audience with a bow was a symbolic “fuck you,” implying that we were lucky to have witnessed the performance at all.

Ultimately, I found “Michael” highly entertaining. I was never bored into a state of rage, as is often the case with “experimental,” downtown dance. But was Young’s ability to keep the audience entertained the result of her unique sense of artistry, or because of her tendency to appeal to the lowest common denominator with extreme sexual content, violent vulgarity, and humorous use of pop music? Admittedly, I was mesmerized.
.
.
.
.
.
.
.
source: vimeo
Ann Liv Young was born on the Outer Banks of North Carolina and has been creating performance work for over eight years. She is one of the youngest artists whose work has been presented at major venues in New York City and Europe, such as MOMA PS1, Brooklyn Museum, The Kitchen, Dance Theater Workshop, P.S. 122, Judson Church, Danspace Project at St. Mark’s Church, Flea Theater, Laban Centre London, Impulstanz, Springdance, The Arches, Tanz Im August, Motel Mosaique, Donau Festival, City of Women, Théâtre de la Bastille, Kampnagel, Brute-Wien, Gender Bender and Inkonst, among others. A 2003 graduate of Hollins University’s prestigious dance program, Young has also studied at Laban Centre London. Her work has been praised by Art Forum, the New York Times, the Village Voice, and The Guardian, among other publications, and was featured in Michael Blackwood’s documentary New York Dance: States of Performance (2010). Ann Liv performed “Sherry” in “Girl Monster Orchestra” presented by Chicks on Speed in Switzerland and Sweden in March 2010. She’s reinterpreted the stories of Snow White (2006–2008), George and Martha Washington (in The Bagwell in Me [2008–2009]), and, now, “Cinderella”.
In early September, Cinderella premiered in New York City at Issue Project Room. Later in the month, Ann Liv went on a 3 week tour of “Cinderella” throughout Norway. In November and December “Cinderella” will tour Austria and Sweden for 6 weeks. In January 2010, Ann Liv departs for a residency at the School for New Dance and Development in Norway. There she will create a show on the students which will be presented at the Something Raw Festival, and perform “Cinderella” at Melkweg.