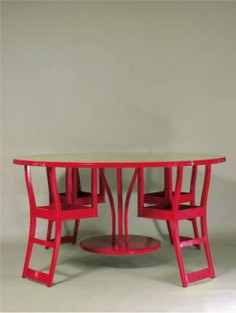 BIOGRAPHY
“I try to express that today’s people are fashionable but empty or shallow in mind,” says Wu Yiming, explaining the rationale behind the faceless, ink-wash figures for which he is known. Wu has likewise created faceless versions of famous sculptures including the Statue of Liberty, Buddha, and a work by Joseph Beuys. The technique of ink-wash and use of rice paper connect Wu’s painting to ancient artistic traditions, but early on he switched from portraying people in antique costumes to contemporary attire, professing that he does not want to live in the past. More recent paintings have moved away from human figures altogether, instead depicting landscapes and portrait-like renderings of plants. Candelabras, with their religious connotations, constitute another of Wu’s subjects: “I am always pondering the relationship between human beings and religion,” he says.