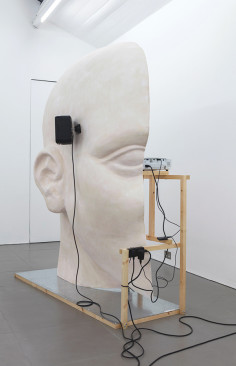 Submission
Artist: Anne de Vries
Year: 2015
Material: 4 track audio, video recorded live streams, fiberglass, wood.
Dimensions: Variable
Inside the first gallery, De Vries pulls together the human psyche by exploding a head into a variety of architectural structures and representations alongside the technology we use to feed thought and communication. Live-streamed screens of global locations take us to far away places, from the congested streets of Times Square, New York City, to a tranquil bird watch in the South American jungle. Time zones are switched to accommodate the viewer’s desire. Each architectural make-shift shelter harbors conversations between a mediator, commissioned by Vries, to investigate and interview various representatives from special unrelated global institutions ranging from monasteries, shelters, detention centers, swingers clubs, and meditation centers. Via a series of discussions and questioning, focusing on the philosophy and mission of each institution, the audio reveals a simulation of codes and rules, which seem to merge into one.
Technology takes an anthropomorphic form and the audio gives shape to distinct places and states of mind that can potentially be entered and fade into each other. The caller’s phrases and vocabulary simulate into fragmented codes of artificial intelligence where humans become part of the automated tools they use.

Born in the Hague, Anne De Vries lives and works between Amsterdam and Berlin. He has exhibited extensively throughout Europe and has work held in various collections, including a recent acquisition by Winterthur Fotografie Museum, Swiss and Foam, Fotografie Museum, Amsterdam.

“In general my work as a directing photographer is the realization of thoughts in reality. By creating staged images with common everyday objects and removing them from their original context and stylizing it, the artificiality of the mundane gets emphasized by reducing a staged scene into a two dimensional image and then photographing it. The image becomes further removed from a dominant physical presence and allows the focus to shift more to the codes and spells that these tableaus evoke. These images are meant to exploit the visual and iconographic potential of the common world as a language. Although this language is often deluding it also can be very direct at the same time. The subjects are often stripped of any excess information until one images remains, at times appearing like an illustration of something unknown, recognizable in its form, but not necessarily in its content. My aim in my work is not to represent, but to reveal by representing the ordinary, framed in a way which often refers to the illusionary world of commerce and fashion, to induce a shift in recognizable conventional codes of our visual culture. Dealing in the banalities of the real world while suggesting a hidden, alternate one. Constructing a scene that triggers, a layered reading functioning as a document of reality and a portal to the imagination.” Photo Statement, 2008, by Anne De Vries.
.
.
.
.
.
.
.
source: visionfield

The idea of photography as a way to experience the world as it is not – in different ways – is fascinating to me, transforming the known into an unknown.” So says Dutch photo artist Anne de Vries, and looking at the wealth of ideas and experimentation on show in the work you can see he’s a man of his word. Whether playing with overlaid identical images which he cuts sections out of, thus revealing more of the same image on different deeper levels, or photographing the reflection of cave paintings in wrinkled aluminium foil, de Vries is out to see how far can an image be pushed whilst leaving it readable. He takes great delight in finding ways of subverting apparently straightforward images, as with the impossible flora in ‘Plan’ or the melting saccharin junk food in ‘Eye Candy’.