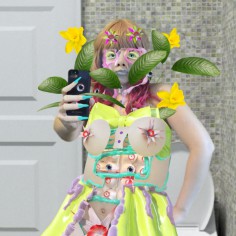 source: daata-editions
Performing alone for a camera connected to a social network @RealSelfCindy examines her body in order to discover her real self. Through the lens of Instagram, human and avatar, subject and object are conflated to form a true identity where the mind can turn the body into anything that it imagines.
.
.
.
.
.
.
.
source: katietorn

Art in General is pleased to present Myopia’s Toil with Katie Torn in the Musée Minuscule.

Torn’s hybrids offer a vision of new forms and substances that fuse organic and synthetic materials. Female cyborgs are presented as Frankenstein-like monoliths; the surface of their bodies smooth like plastic dolls or skin treated by reconstructive surgery. Elements comingle in an uncomfortable conflation of innocence and adulteration—playful, childhood toys rendered in soft pastels reside in toxic, apocalyptic environments. Operating in close relation to the “natural” world, biomorphic forms excrete and ingest brightly colored liquid into and from their surrounds, suggesting a life-force akin to oil or blood.