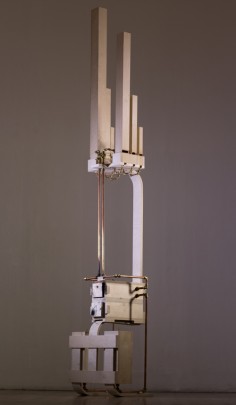 A monetary system designed within the cultural context of B.F. Skinner Walden Two. The project imagines a payment system that challenges the established monetary function of ‘a store of value.’ Creating a new method of exchange that encourages people to actively destroy their money during a transaction. The process positively reinforces this behaviour through the creation of music, produced from the burning money within the transaction machine.
Walden coinage is made from potassium nitrate and sugar to produce smoke. The musical notes that are created are linked to the denomination of the money.
Walden-note Money is part of a 3 year research project, which focuses on the development of a new design methodology called counter-fictional design.

During every transaction the seller is obliged to aid the buyer in the destruction of their money equal to the cost of the service or object he/she is purchasing. Through the destruction of money, musical notes are created which are linked to the coins denomination. For example a C is 1 Walden-note, a D is 2, an E is 3 and so on; these notes have two main functions. Firstly the pleasant sounds created help to positively reinforce this behaviour and secondly the burning money communicates the economic state of the society to the ‘managers and planners’.

The Walden Two coins are made from potassium nitrate and sugar. This mixture produces large quantities of smoke when burn’t.

When the money is sealed within the machine and ignited; the smoke is forced through the tubing into the wooden organ pipes, which creates the walden ‘notes’.
.
.
.
.
.
.
.
source: austinhouldsworthcouk

Born 1983 in Macclesfield, England. Austin is a researcher at the Royal College of Art, Design Interactions department and co-founder of the FOM design awards.
His work takes an experimental approach towards design; often leading to the development of new methodologies that generate alternative perspectives and challenge the status quo.
.
.
.
.
.
.
.
source: futuremoneyaward

Austin Houldsworth is a visiting tutor and researcher within the Design Interactions Department at the Royal College of Art. He is the curator of the ‘Future of Money Design Awards’ 2011 & 2012 sponsored by Visa Europe & Consult Hyperion. In 2010 he was selected through an open competition to build the worlds first prototype fossilization machine called ‘2 million and 1AD’ for the Tatton Park Biennial.
Houldsworth graduated in 2009 with an MA from the Royal College of Art; having previously studied Interactive Arts in Manchester. Through his work he strives to create solutions to social & cultural issues that are often neglected by industry.