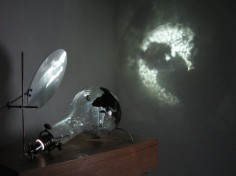 Bulb is an opto-kinetic sculpture that creates a unique light display within its environment. A large light bulb (originally used in lighthouses and spot lights) rotates on the base whilst light passes through the moving glass. The bulb’s internal surface has the world map fixed on it. The image of the world map has been created with a photographic process using photo emulsion paint. As the image of the word map rotates various continents are abstractly disassembled and are projected onto the walls and ceilings of the exhibition space. The world map that we all recognise is turned into an almost unrecognisable sequence of shapes that cover the space around the sculpture. Bulb alludes to Man’s relationship with its environment. The rotating light bulb is like an old terrestrial globe of the world, rotating about its axis. Its fragility becomes apparent as it is just held in place by gravity. The light bulb is an all too familiar object that we associate with industrial age, technology, power, energy, light, invention and creative ideas. Its purpose is to make us see things, that otherwise we would not be able to see – to see things differently. The work challenges our association with familiar objects, by subverting their use and making something that is unpredictable. The fusion of two common objects – globe and a light bulb – results in a great combination of global issues and ideas that we are faced with today. To list them would be taking away from its worthy ambiguity, and power. The similarity to nineteenth century scientific instrumentation explores the theme of discovery and exploration, and invites the viewer to analyse the complex way in which the rotating images of Bulb are created.
.
.
.
.
.
.
.
source: balintbolygo

Bolygó’s work explores the similarity between the artistic and scientific mind. His work explores how both minds are motivated by the same need to discover/uncover, and turn resulting ideas into totalities.

His work explores the artistic practice through a process of invention, science and engineering. His mechanical instruments become autonomous and investigate the making process independently. The relationship between the cyclic and predictable nature of the machine and the unpredictability of the human touch conjures up both notions of random chaos and universal order. With the elimination of the artist’s touch, the natural universal forces become the creators of the artwork and the emphasis shifts towards the ‘act of creation’ being the object of beauty. The machine’s process and the resulting images become inseparable dynamics of the work.

Steel weights, wires, motors and pulleys are transformed into mechanisms animated by natural universal forces. In constructing these devices the artist is creatively challenged to investigate how an underlying scientific structure or process can change or shape an object. The practical solutions to physical problems concerned with friction, weight, tension, and compression are all elements that give idiosyncratic aesthetic to his kinetic devices.

The mechanisms often explore the passing of time, and they record traces of particular events and movements on a surface – paper, metal, plaster, glass – through the build-up of complex patterns, highlighting the connection between space, matter and time.