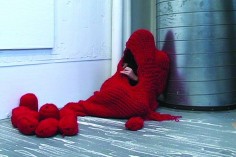 Work: Enclose, Single-channel video, 11 hours, 2005. This video documents an eleven-hour performance during which I crocheted myself into a cocoon using red yarn. I crocheted continuously without breaks and the video shows the entire performance in real-time. Image courtesy of the artist.
.
.
.
.
.
.
.
source: beacamacho

This video work deals with ideas of isolation, security, shelter and of shaping one’s own environment. The video documents an eleven-hour performance during which I crocheted myself into a cocoon using red yarn. I crocheted continuously without breaks and the video shows the entire performance in real-time.
.
.
.
.
.
.
.
.
source: crochetlab

I learnt how to crochet during my junior year of college. I was working on ‘Untitled (Sound Objects)’ and I decided that I wanted them to be covered with fabric that I had made, so I taught myself how to crochet using instructions I found on the internet. I liked the fact that crocheting allowed me to easily manipulate the shape that the fabric was taking. I have never used patterns in my work because I prefer to improvise my forms. I have also used knitting in my work. Last year, I created an interactive fabric by knitting together mohair and electroluminescent wire. Whether I crochet or knit usually depends on the physical requirements of the project. For example, I knit the interactive fabric because I found that it was easier to knit wire than crochet it and I crocheted my ‘Enclose’ piece because I needed to complete it as quickly as possible. My work deals with experiences of isolation created by physical, mental or emotional separation. A lot of this is deeply connected with my personal experience of having moved away from home at the age of eleven and grown up apart from my family. Along with themes of separation and isolation, I want the work to address ideas of home and belonging. To me, crochet is associated with home, warmth and security. However, this notion formed quite outside my own experience. I did not grow up with mothers or grandmothers who crocheted or knitted. For me, the crocheting refers to a somewhat idealized version of home. I hope that in my work it speaks to ideas of comfort and discomfort, familiarity and alienation. I was also drawn to crocheting because of its repetitive and meditative nature. I think there is often an obsessive quality to my work. The sound objects are from an earlier body of work that deals with issues slightly different from those of ‘Enclose’ or ‘Extensions.’ The sound objects were designed to be interactive and to allow a physical closeness while suggesting a sense of alienation using the sounds. Since the physical context within which a piece is displayed affects our relationship to the piece, in the past I have displayed the sound objects on sofas and in custom-made environments that promote the idea that they are meant to be played with.

‘Extensions’ and ‘Enclose’ address different ideas. The decision not to show the actual crocheted objects was made because of the importance of separation and distance. Although emotions are physically manifested in this work, I felt a need to maintain a sense of privacy. Crocheted extensions embody the impulse to create connections with others but they have been packed into a box and are presented using only photographs. There is a strong sense of withdrawal, especially in ‘Enclose’ where it is emphasized by placing the video monitor on the floor in the corner of a room. I wanted to preserve a physical and psychological divide between the viewer and the work by limiting the viewer’s access to the pieces.

When I started working on this piece, I was interested in hiding spaces and creating my own environment. I had never done performance before, so I was a little nervous about this project.

Most of the planning consisted of finding the appropriate yarn and figuring out a way to set up the video equipment in a way that would allow us to continuously capture the entire performance. For the video, I had the help of Greg Gagnon and my brother, Enzo Camacho. We set up at 4:00am, started shooting at around 6:00am and continued until the performance ended at around 5:00pm. The performance took place on the floor in the corner of my studio and my audience consisted only of the video crew and the other students who were working in the studio. For the most part, there were only one or two other people in the studio with me. I wanted to crochet myself in entirely but I had no idea how long it would take or how much yarn I would need. I wasn’t even sure if I would physically be able to do it since I did not want the performance to be interrupted by any breaks. I crocheted continuously for more than ten hours without food or water and was incredibly relieved when I had finished. The video was recorded using two tape decks so that we could put the footage together seamlessly. The material from fourteen separate tapes was edited in order to create a continuous and complete document of the performance. I decided to present the video in its entirety and in real-time to emphasize the process and duration. This solitary activity is performed repetitively in a way that is reminiscent of ritual and it happens consciously over time, allowing an emotional investment in the project to be formed. I don’t expect people to spend hours viewing the video but I want them to get the sense that this was an extended performance. I hope that the title and the activity in the video suggest what is going on even with a short viewing of the piece.

I went into this performance not knowing what it would feel like or what I would be thinking about. For the first hour or so, all I could think about was how thirsty I was because I didn’t drink anything before I started so that I wouldn’t need to go to the bathroom. After that, I forgot all about having to eat, drink or go to the bathroom and I was very focused on what I was doing. I hadn’t predetermined how the shape of the crocheted cover was going to come together so I was improvising the form and constantly trying to figure out which parts needed to join up in order to have it close around me with the least amount of excess. The hardest part was the last hour because I was curled up with my head slightly tucked and was crocheting in a very awkward position. It was quite painful and I was quite desperate to be done with it. When it was over, I was so relieved and exhausted that I fell asleep inside the crocheted cocoon for a few minutes. It was really warm and cosy, and I actually loved being inside it.
.
.
.
.
.
.
.
source: curate

Over the past few years, Harvard students may have witnessed a person crochet herself into a cocoon, attended an art exhibit in an inflatable gallery, or tried on some gloves with three-foot long fingers. If so, they are among the individuals who have encountered the innovative work of Roberta Beatriz “Bea” A. Camacho ’05, one of Harvard’s most talented visual artists.

Camacho, who is also a Crimson editor, left her home in the Philippines at age eleven for High Wycombe, England, and moved to the United States to attend Harvard. This transience in her surroundings led naturally to the central theme of her art.

“My work explores isolation and the situations that create it,” Camacho says. “My experience of having left home informs and inspires this work,” which she says “aims to address physical, emotional and mental separation.”

While art relating to such personal topics has the potential to come off as self-indulgent and hackneyed, Camacho’s is neither. Much of the poignancy in her work stems from its originality.

For example, Camacho recently crocheted herself into a large red cocoon over eleven straight hours, without food, drink, or even a bathroom break. The entire performance was videotaped, and will be played in real-time during the showing of “Unplaced,” the VES senior thesis exhibition, which includes Camacho’s sculpture, video, performance, sound, photography, and installation works for her thesis.

However, those who want to see all of Camacho’s art, including the cocoon video, would be well-advised to attend the exhibition soon after it opens on May 5. Her final Harvard project involves storing all her work in large cardboard boxes, piece by piece, while it is all still on display. Every night or two, she will remove something from the exhibit, place it in a box, and seal it closed, until all that remains visible are the labeled boxes. The end result is a final exploration of the theme of isolation that is so prevalent throughout her work.

“There is a withdrawal that is signaled by acts of hiding, putting away, and sealing, and a rejection of external contact that is demonstrated by cardboard boxes,” she says.

Throughout her work, Camacho considers “mediated forms of communications, connections, disconnections, privacy, absence and transience.” This is well exemplified in her “extremely elongated gloves and sleeve-like sculptures.” While her friends say that the long-fingered gloves could create a popular fashion trend, Camacho focuses on conveying a sense of disconnect and isolation.

“They could go on forever, but still don’t touch anything,” she says of the snake-like crocheted black fingers.

Her other works include a portable “Inflatable Museum” that she and Han Yu ’06 co-designed, created, and curated last February, as well as an “interactive fabric” she crafted last year from mohair and electroluminescent wire that lights up when touched.

During her time at Harvard, Camacho has shown her work in the Signet, the Carpenter Center, the Adams Artspace, the Lowell bell tower, and in the pages of The Advocate. After graduation, she hopes to move to New York City, where her work can find a whole new audience.
.
.
.
.
.
.
.
source: .mam-st-etienne