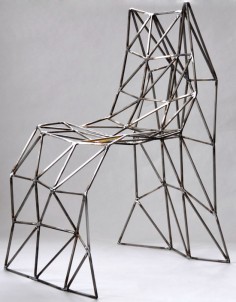 Work: The Graziano chair was inspired by computer generated wire-frame models, and by toughness coupled with fragility. Wire frame drawings express form though an economical use of marks, and with their own set of codes, they allow a viewer to look at the inside and outside of an object at the same time, and from many angles simultaneously.
Photographer: Joe Mayor
.
.
.
.
.
.
.
source: designindaba

Mayer’s Frame Chair works with the idea that technology can be a mediator between people. At the same time, the Frame Chair has a character of its own, highlighting form and formality as two of the key features of the design.
.
.
.
.
.
.
.
.
source: designboom

UK-based designer julian mayor works in a style which could be considered ‘informal tech’, drawing on a combination of mathematics / geometry with the abstract. drawing on the influences of gaetano pesce and sol lewitt meets datasystems, his work is technical in its form. Here is a look at his latest projects which explore faceted surfaces, skeletal and organic structures.
.
.
.
.
.
.
.
source: julianmayor

Julian Mayor is an artist and designer based in East London. His work is inspired by the sculptural possibilities of computers combined with industrial and craft making processes. After graduating from the Royal College of Art in 2000 he worked in California as a designer for IDEO design consultancy. On returning to London in 2002 he worked for Pentagram and other design studios before teaching 3D modelling at the London College of Communication and starting to exhibit his own work. His designs have been shown at the V&A London, Rossana Orlandi Milan, FAT Galerie Paris and 21st21st New York, and he has also installed a permanent series of sculptural benches in a park behind the Tate Britain in Pimlico, London.