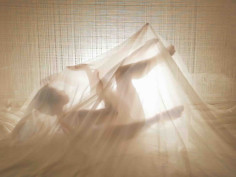 source:framewebcom
Park’s most recent works are both a continuation and a development of her earlier videos. There is an added complexity to the structure of her material as well as a larger scope to her narrative. Park has created, for the first time, a piece with three dancers: CELL, in which she experiments with perspectives and display; CORE, which is about an individual’s dialogue with sculptural form. The latter piece is the most poetic work produced by the artist yet: afemale dancer evolves slowly into life as if emerging from the womb.

Miyazaki’s wonderfully original sculptures are quite different to Park’s videos as they arise out of an observation of the exterior world. After witnessing the tragedy of the tsunami, the artist felt the need to create a new ‘utopian’ vision out of the ashes of the ‘dystopia’ in Japan. He wanted to create artworks out of the rubble – sculptures that would point forward to a new beginning. Marrying traditional Japanese origami with parts of old car engines, he creates beautiful artworks that convey a sense of dystopia. The particularity of these sculptures is increased by sound, which emanates from strategically placed speakers. The jingles vary from music played in Japanese supermarkets to Tokyo metro system announcements that are made whenever someone has committed suicide.
.
.
.
.
.
.
.
source:londonistcom
Sound and performance art are both expanding genres and this show brings together two very different artists to create works that play both to our eyes and ears.

On the ground floor are Keita Miyazaki’s industrious sculptures made from found materials such as car parts, yet they are shaped like plants to sit in a middle ground between nature and industry. Where we would expect to see the flower heads, instead are concealed speakers, which emanate the sounds of the artist’s native Japan — from generic music played in supermarkets to the tune played when a suicide is announced on the Tokyo metro.

These surreal sculptures evoke a certain discomfiture in the viewer, which is fitting as the artist has been inspired by the recent tsunami devastation in Japan.

Downstairs are the video dance works of Bongsu Park. Here, themes include the after effects of our actions and the parts of our life that tie us down. The videos are meditative with often hypnotic performances. Our favourite is called core and involves a woman writhing underneath a sheet as if she is preparing to emerge from a cocoon.

One problem with video art is that galleries are often unable to display it properly. But here it succeeds, and it’s great to see the gallery’s lower level has been transformed with subtle partitions that ensure each work is separated and can be experienced as an immersive work.

Both these artists offer a departure to the strong line-up of painters at normally on show at Rosenfeld Porcini and so we were pleasantly surprised at this two-person show that is both inventive and engaging.