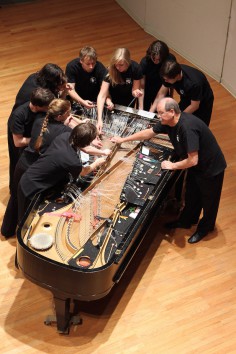 After 37 years based at Colorado College, The Bowed Piano Ensemble has ended its academic affiliation. We intend to find a new home for the bowed piano and its legacy.

“Few composers achieve true originality in their palette. Occasionally a composer comes along who finds his territory and explores every nook and cranny within it, luxuriating in its richness. Stephen Scott’s brilliant forays into the interior of the piano must be included with the prepared piano work of John Cage (and) the player piano machinations of Conlon Nancarrow as examples of startlingly unique artistic vision. The instrument speaks in a new but strangely familiar voice, as harps, mandolins and orchestral strings seem to emerge. Scott has found his own orchestra in there” (Ingram Marshall).
.
.
.
.
.
.
.
.
source:bowedpianoensemblecom
Stephen Scott was born in Corvallis, Oregon in 1944 to parents trained in the sciences; early study of music included tutoring in recorder in England, clarinet and saxophone in school bands, and private study and transcription of recordings by Charlie Parker, Miles Davis, Thelonious Monk, Gil Evans, Oliver Nelson and John Coltrane in high school. After studying composition with Homer Keller at the University of Oregon and Gerald Shapiro at Brown, he met and studied informally with Steve Reich in Ghana. Later he collaborated with Terry Riley, and these two composers became his most important influences outside jazz. Scott is a Emeritus Professor of Music at Colorado College. He has served on the faculty of The Evergreen State College and as visiting composer at Eastman School of Music, Aspen Music School, New England Conservatory, Princeton University, University of Southern California, Cal Arts, and at festivals and conservatories in Germany, France, Italy, Estonia, Bulgaria, Lithuania, Ireland, Norway, England, Canary Islands, Bermuda, New Zealand and Australia. He was named 2008 USA Simon Fellow by United States Artists, and in 2004 he was a resident scholar at the Rockefeller Foundation’s Bellagio Study and Conference Center on Lake Como, Italy.

Scott is listed in New Grove’s Dictionary of American Music and Baker’s Biographical Dictionary of Musicians, and his work is discussed in several books on twentieth-century music. Awards include commissions from Meet the Composer/USA, Pacific Symphony and the Barlow Endowment, a grant from the Peter S. Reed Foundation, the New England Conservatory/Rockefeller Foundation Chamber Music Prize, and a National Endowment for the Arts Composer’s Fellowship. His music may be heard on the New Albion, Navona and Albany labels. Film and television credits include Traffic (DVD version), Egg: the Arts Show (PBS) and the NBC special Revenge of the Whale. Scott lives in Colorado Springs with his wife, Victoria Hansen, who tours with the Bowed Piano Ensemble as soprano soloist.
.
.
.
.
.
.
.
source:nytimescom
Few chamber groups deploy their musicians as oddly as the Bowed Piano Ensemble. The 10 players, students led by the composer Stephen Scott, stand around, and sometimes under, a concert grand, armed with items of all kinds — nylon fishing line, piano hammers, guitar picks, strips of paper, rolls of plumber’s tape — and reach into the instrument to draw sounds from its strings. The music is tactile and otherworldly, sometimes percussive and often lyrical.

Mr. Scott formed the ensemble in 1977 as an outgrowth of a new-music group he directed at Colorado College in Colorado Springs, where he has taught since 1969. He has written prolifically for the group, which has released albums of his music on the New Albion and Albany labels, with a new installment, “Ice & Fire,” due next month on Navona.

The ensemble will play music from “Ice & Fire,” as well as older works, on Saturday evening at the Allen Room in what will probably be its final New York concert. Mr. Scott, 69, plans to retire at the end of the academic year, and as he put it, “Nobody has stepped up to say, ‘I’d like to take over when you quit.’ ”

He will, he added, continue to compose, probably for more standard forces. He already has an opera in the works. And perhaps with his post-retirement career in mind, Mr. Scott has expanded his scoring slightly over the last decade.

“Afternoon of a Fire,” which opens the new CD, commemorates the 2012 Waldo Canyon fire near Colorado Springs and uses American Indian flutes. And his program on Saturday includes music from two song cycles, “Paisajes Audibles” (2002) and “The Deep Spaces” (2005), with the soprano Victoria Hansen, his wife, as the soloist, as well as “Lyric Suite” (2011), which has a solo line for Thomas Stacy, the former English hornist for the New York Philharmonic.

“I heard Stephen’s ensemble on the radio one night as I drove home after a Philharmonic concert,” Mr. Stacy said, “and I was intrigued by the sound. He’s created something that’s truly one of a kind, and I could imagine the sensuous, melodic English horn sailing over the sound that this group produces. So I looked him up on the Internet and asked him to write something for me.”

Mr. Scott did not invent the idea of playing the piano by manipulating the strings directly — as opposed to using the keyboard — or by otherwise tampering with the instrument’s innards. Early in the 20th century, composers like Erik Satie, in “Piège de Méduse,” and Heitor Villa-Lobos, in “Chôros No. 8,” instructed pianists to weave paper between the piano’s strings. And John Cage began writing for what he called a “prepared piano” — with pieces of metal, plastic and other materials inserted into the instrument’s mechanism — in the 1930s. Composers since then have regularly asked players to reach into the piano to strum, pluck or strike the strings.

But most composers who have tinkered inside the box have expected pianists mainly to use the keyboard to produce their sounds. What sets Mr. Scott apart is that his music, composed over several decades, ignores the 88 keys. His players go directly for the piano’s guts, and listening to his music without seeing the ensemble, you would not guess that it was produced on a piano — or, for that matter, on any conventional instrument.

Mr. Scott writes in an accessible post-Minimalist style that has evolved considerably since the early 1980s, when his first recorded pieces used chugging, repeating figures that show Steve Reich’s influence, as well as droning, sometimes harmonically dense organlike sounds. He took a while to find a style that suited him. As a student, first as a boy in his native Corvallis, Ore., and then at the University of Oregon and Brown University, he played clarinet and saxophone, and his heroes were jazz musicians — Charlie Parker, Miles Davis, Thelonious Monk, Gil Evans, Oliver Nelson and John Coltrane are the ones he readily names.

In 1970 he went to Ghana to study polyrhythmic drumming, and met Mr. Reich, who was there to do the same. Mr. Scott studied drumming in other African countries as well, and when he returned to Colorado, where he had just started teaching, he fell under the spell of Mr. Reich’s and Terry Riley’s Minimalist ensemble works.

“I was searching for my voice, as most composers do at some point,” Mr. Scott said in a Skype interview from his office in Colorado Springs. “You can write 12-tone pieces and sound like 200 other composers, and I was engaged in that for a while, as a lot of us were.

“But I became interested in a trend, in those days, of writing for masses of similar instruments — 40 flutes, or dozens of tubas. I was intrigued by that, but I didn’t want to duplicate what other composers were doing. And it occurred to me that using a piano, I could create an ensemble that was homogeneous and heterogeneous at the same time.” As the director of a new-music ensemble at the college, he had no trouble finding students eager to experiment. They began by making simple tools like nylon filament, which when pulled across the piano’s strings acts in much the same way a bow does on a stringed instrument. Popsicle sticks with horsehair attached are used similarly but draw a different kind of sound. From there, the arsenal grew.

“A lot of good ideas have come from the students,” Mr. Scott said. “Some have an interest in engineering, or carpentry. A lot of them like to tinker with things. They’re kind of my research assistants.”

All of the tools the group uses are handmade, and when Mr. Scott is invited to perform one of his works at another college, he insists that the students there make their bows, hammers and other devices too. To make it (relatively) easy for the players to find the right notes inside the piano, the strings are color coded according to pitch.

“If we’re playing a lyrical melody,” he explained, “we have to work the way handbell players work, with each individual playing a single note at exactly the right time, rhythmically and dynamically.”