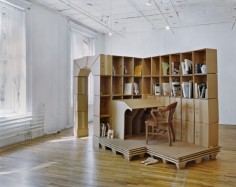 The work of Céline Condorelli is fundamentally informed by architecture, a discipline in which the artist holds numerous degrees, including a PhD from Goldsmiths College in London. While she works across mediums—in sculpture, film, text, performance, and installation—Condorelli’s art is consistently underlined by the concept of “support,” a notion focused on community and togetherness. This plays out in Condorelli’s work through interactive projects and constructed environments, wherein viewers are prompted to participate with found objects, the art, and each other. Essentially interested in human interactions and relationships, Condorelli has developed a thoughtful and dynamic artistic practice that smartly bridges creativity, politics, and social constructs.

Condorelli lives and works in London. She has exhibited at the Museum of Modern Art in Antwerp, Dublin’s Project Art Centre, the Castello di Rivoli, Eastside Projects in Birmingham, and New York’s Artists Space, among other venues across the globe.
.
.
.
.
.
.
.
source: celinecondorellieu

I work, broadly speaking, with art and architecture, combining a number of approaches from developing possibilities for ‘supporting’ (the work of others, forms of political imaginary, existing and fictional realities) to broader enquiries into forms of commonality and discursive sites, resulting in projects merging exhibition, politics, fiction, public space and whatever else feels urgent at the time.
I have been interested in the role and nature of what I call ‘support’ through three specific, yet parallel and simultaneous strands:

The first one is thinking the role of support through the performative and the theatrical, as stages and staging devices through projects like Surrounded by the Uninhabitable, SALT Istanbul (2011-2012), Revision, part 1 and 2 (Artists Space, NY 2009, and Cell Projects Space, London 2010), Green Room (White House) -a temporary public square/theatre in 4’33’’- Bregenzer Kunstverein, 2007, Theatre Pieces (stage/public plaza at Tate Triennial, London, 2006) and Alterity Display (O’Hana Gallery, London, 2004).

The second one addresses support through structures, with the 10-phase project Support Structure, with artist-curator Gavin Wade (various sites, 2003-2009), resulting in the book Support Structures (Sternberg Press, 2009), which is both a project and the creation of the first bibliography, or a reader, for a type of practice, and founding of Eastside Projects, Birmingham.

Finally, the third movement explores forms of commons and commonality, making a small, specific cut into the large question of how to live autonomously and together by focusing on old and new enclosures, forms of communing and of being in common. This aspect of my practice focuses on property relations and the quotidian, as for example in White Gold; (Social Fabric, Iniva, London 2012), “There is Nothing Left” (ACAF, Egypt, 2011-12), Life Always Escapes (Generosity is the new political, Wysing Arts, 2009), and the text piece of the same title (e-flux journal, 11/2009).