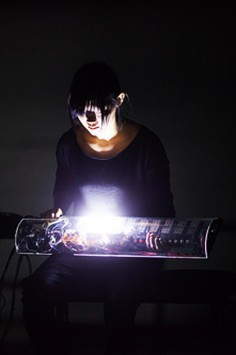 source: robotfestivalit
Codici binari. Suoni digitali. Atmosfere intime. Fasci luminosi che restano impressi nella retina, e nelle emozioni, degli spettatori. A controllare tutto, la mano di Arduino. La taiwanese Yen Tzu Chang (ora residente a Linz) porta a roBOt “Self Luminous 2 – Unbalance”: una creatura artistica nata originariamente ancora nel 2013 che però è sempre in divenire, sempre in evoluzione, sempre più raffinata ed affilata. Ma sempre fedele al principio che la luce, esattamente come il suono, è un elemento perfettamente naturale, un elemento con cui l’uomo si relazione in modo totalmente intuitivo.
.
.
.
.
.
.
.
source: changyentzu
Self-luminous 2 is an experimental handmade instrument shown as performance. It is a series-project which I have been working on since 2013 and finally developed into shape in 2014. I am looking for intimate and personal instrument that reflects on the relation of digital sound and light message. In computer language, light on is 1 and light off is 0. If more than 2 lamps, it could be code or readable possibility by the meanings. When I press the button or turn the knob, the message will be sent to Pure Data, and the sound will be triggered in live by Pure Data.
The Data of sound such as frequency and volume, are analysed and sent out to the second Arduino to control the light. The light, in thus case, is an intuitive element for human beings. From this point, it is really close to sound which disturbs our biological body directly. The lights are visualised and they can be transferred the into messages. The message might be readable by coincidence with the link to the code. The light is bright enough to let audience to have persistence of vision in mind. During the performance, the sound will be reproduced by code and part of it is impromptu.
.
.
.
.
.
.
.
source: robotfestivalit
Binary codes. Digital sounds. Intimate atmospheres. Beams of light that remain impressed in the retina, and in the public’s feelings. Everything monitored by Arduino. The taiwanese Yen Tzu Chang (now living in Linz) brings to roBOt “Self Luminous 2 – Unbalance”: an artistic creature originally born in 2013, that is constantly changing, constantly evolving, becoming more elegant and sharp. Yet always loyal to the principle by which light, just like sound, is a perfectly natural element, an element which man relates to in a completely intuitive way.
.
.
.
.
.
.
.
source: changyentzu
Yen Tzu Chang is a Taiwanese media artist who lives and studies in Linz, Austria. She has been working on several fields of interdisciplinary art pieces and experimental sound-installation performances since 2011. She has done performances or exhibited her works in international conference and festival, including Ars Elecronica Festival, roBOt 08 Festival, Linux Audio Conference and so on. Currently, she is studying the M.A. Interface Culture at Kunstuniversität Linz.