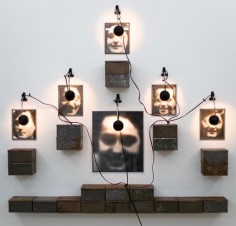 source: artnet
Christian Boltanski is a contemporary French Conceptual artist. Best known for his photographic installations, the painter, sculptor, and filmmaker explores life, death, and memory in his practice, often focusing on the Holocaust as he blurs the boundaries between truth and fiction. “You can tell the truth more truthfully than with the truth itself,” he once quipped. For his seminal work La traversée de la vie (2015), Boltanski used the same photographs as he had in 1971 for Album des photos de la Famille D.—the images were enlarged and printed on fabric and illuminated by hangings lightbulbs, inviting the viewer to walk through them. Born on September 6, 1944 in Paris, France to a Jewish father, the impact of World War II loomed throughout the artist’s life. Boltanski often has objects stand in for absent subjects, bringing spirituality and meditation to his practice and following in the footsteps of Conceptual artists of the 1960s and 1970s, such as Joseph Beuys. His work can be found in permanent collections of The Museum of Modern Art in New York, the Tate in London, and the Centre Pompidou in Paris. Boltanski currently lives and works in Malakoff, France.
.
.
.
.
.
.
.
source: artsynet
Preoccupied with collective memory, mortality, and the passage of time, Christian Boltanski creates paintings, sculptures, films, and mixed-media installations that approach these themes in a range of styles, symbolic to direct. Boltanski often makes metaphorical use of found objects, as in No Man’s Land (2010), an enormous pile of discarded jackets set to the soundtrack of thousands of human heartbeats, suggesting the anonymity, randomness, and inevitability of death. In Monuments (1985), electrical bulbs cast a seemingly bittersweet light on pictures of child holocaust victims. Describing his interest in personal histories, Boltanski has said, “What drives me as an artist is that I think everyone is unique, yet everyone disappears so quickly. […] We hate to see the dead, yet we love them, we appreciate them.”

French, b. 1944, Paris, France, based in Malakoff, France
RELATED CATEGORIES