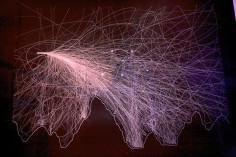 source: sebly
Lunar Trails is an interactive installation, first commissioned by the Dublin Science Gallery for their GAME exhibition, running from November 2012 to the end of January 2013.

It features a full size arcade cabinet running the vintage 1979 game Lunar Lander. As you play the game, the path that you take is rendered on the wall with a large hanging drawing robot.

The trails build up to produce artworks that are solely created by the game players, and is a reflection of all their individual journeys to the surface of the moon.

Seb Lee-Delisle is a digital artist and speaker who uses computers to engage with people and inspire them.

As an artist, he likes to make interesting things from code that encourage interaction and playfulness from the public. Notable projects include Lunar Trails, featuring a 3m wide drawing machine, and PixelPyros, the Arts Council funded digital fireworks display that toured nationwide in 2013.

As a speaker he demystifies programming and explores its artistic possibilities. His presentations and workshops enable artists to overcome their fear of code and encourage programmers of all backgrounds to be more creative and imaginative.

His recent work Laser Light Synths won the 2016 Lumen Interactive Prize. He won 3 Microsoft awards in 2013, and he was Technical Director on Big and Small, the BBC project that won a BAFTA in 2009.