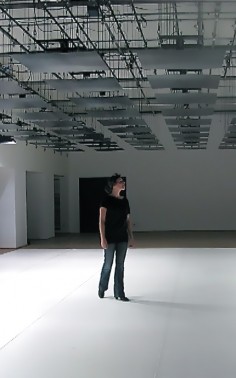 The intimate topography of the brain is laid out across a grid of 80 steel ceiling tiles as a spatialized form of tapping. The visitor can experience the dynamics of his cognitive self by fitting a wireless EEG interface on his head, that allows him to walk under the acoustic representation of his own brain waves.

The accumulating resonances of impacted steel sheets generates penetrating overtones. The spatial distribution of impact and the overlapping of reverberations create a very physical soundspace to house an intangible stream of consciousness.

‘Staalhemel’ (‘steel sky’, 2009) articulates the contradictory relationship we entertain with our own nervous system. Neurological feedback makes that the cognitive focus is repeatedly interrupted by the representation of this focus. Concentrated thinking attempts to portray itself in a space that is reshaped by thinking itself nearly every split second.
.
.
.
.
.
.
.
source: christophdeboeck

Christoph De Boeck approaches sound as a visual and tactile medium. In his installations sound turns out to be a tangible presence. The spatial organisation of sound sources, the choice of materials in media and the method for sound transmission all are part of De Boeck’s permanent research into how sound relates to an environment and to human presence. The dynamic spatialisation of sound confronts the visitor with the idea of acoustic energy as an artistic object and even as a visual principle.

De Boeck transforms spaces by means of acoustic energy. He built several works with volumes of steel and transducers to explore the resonance of steel in relation with the presence of the visitor. These works create a space not only with visual interventions but mainly through sound waves and their inherent kinetic energy, as well as the resonant overtones resulting from the application of sound on steel surfaces.

Recently he turned to the transformation of a public atmosphere through the exclusive use of sound with the creation of HORTUS, a work for a (semi-)public garden. In this collaborative work with Patricia Portela he re-distributes the diversity of bird sound in a park or garden. The environment responds to natural conditions like wind and sunlight and is then further complicated by the frequency of visitors and a financial-statistical algorithm in a juxtaposition of ecology and economy.

From 2002 to 2012 Christoph De Boeck was a founding member of the Brussels based interdisciplinary collective Deepblue.

In 2013 De Boeck joined Aernoudt Jacobs to co-direct Overtoon, a platform for sound art located in Brussels. Apart from producing the work of both names, Overtoon wants to support artists and give new impulses to the field of sound and media art.
Overtoon offers yearly long-term residencies to artists with the aim to produce their works. Selected artists can make use of a workspace in the centre of Brussels, tools which facilitate the production process related to audio/media art, technical expertise, production and financial support and a broad international network.

Overtoon is supported by the Flemish authorities and the Commission of the Flemish Community (VGC) in Brussels.

Christoph De Boeck approaches sound as a visual and tactile medium. In his installations sound turns out to be a tangible presence. The spatial organization of sound sources, the choice of materials in media and the method for sound transmission all are part of De Boeck’s permanent research into how sound relates to an environment and to human presence. The dynamic spatialization of sound confronts the visitor with the idea of acoustic energy as an artistic object and even as a visual principle.

De Boeck has also been a co‐artistic director of Deepblue, an interdisciplinary production structure. Within this structure he devised concepts for performances and he developed spatialised installations for data and audio. Their most known work is ‘you are here’ (2008), which distributes objects, audio and text amongst spectators by means of archive boxes. In collaboration with research centre IMEC, the interactive installation Staalhemel (Steel Sky) was opened in 2009. This responsive environment connects the resonance of steel plates with a real time measurement of the visitor’s brainwaves. In this project there is no more audio playback; all spatial sound originates from 80 mechanical pin impacts on a matrix of steel segments. The resulting patterns represent fluctuations in the brain activity of the visitor. In his installations, the sound artist Christoph De Boeck approaches sound as a tangible, sometimes even visible medium. Within the deepblue framework he has made Closer and You are here. His interactive installations include Staalhemel/Steel Sky and other steel works.
.
.
.
.
.
.
.
source: vimeo

Christoph De Boeck directed the interdisciplinary organization ‘deepblue’ from 2002-2012. From 2013 onwards he co-directs with Aernoudt Jacobs a platform and production structure for sound art called Overtoon, based in Brussels. De Boeck engaged in many productions as a sound artist, sound designer, and electronic musician.
He renders sound tactile through spatialization and with alternative choices of sound transmission, like transducers to incite steel resonance. For concerts in multichannel audio set-ups he often teams up as Audiostore with Eavesdropper/Yves De Mey.
.
.
.
.
.
.
source: jocelynequelofr