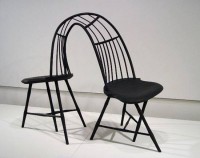 In 2013, Christopher Kurtz’s (A)typical Windsor Form (2004) will be included in a traveling exhibition entitled “Against the Grain: Wood in Contemporary Art, Craft and Design,” which will originate at the Mint Museum, Charlotte, NC and then travel to the Museum of Art and Design. (A)typical Windsor Form is a tour de force showing two Windsor-style chairs arcing back to meet one another. This work is at once a comment about the historical precedent in furniture making that limited furniture makers to make objects out of the tools of the trade which were used primarily for domestic, utilitarian objects (like drying racks), as it is about the unlimited possibilities once the machine is replaced by a skilled hand.
.
.
.
.
.
.
source: dwell

After college, he went on to work as the studio assistant to artist Martin Puryear, who is the subject of a recent retrospective at the Museum of Modern Art in New York. While working with Puryear, Christopher refined his wood working skills and began maturing as an artist in his own right. Kurtz has gained national attention with his sculpture and is in several public and private collections. He has received numerous grants and awards, including the prestigious Louis Comfort Tiffany Award in 2005. Kurtz is represented by Matin gallery in Beverly Hills, California. www.matin-gallery.com

In 2005 Christopher married the American glassware designer, Deborah Ehrlich, and set up his studio in the Hudson Valley of New York State. Kurtz has always had a passion for furniture and began experimenting with some designs. The result is a new collection of seating just out in 2008.

Christopher Kurtz Studio offers a unique product. The furniture is all hand made, while utilizing some small scale production techniques. Kurtz has said of his work, “I am interested in moments where the handmade is replaced by production– and when the pendulum swings back to the handmade due to needs that production can not meet.” Some of the chair parts are made with very sophisticated tools like the computer numeric router, while other parts, like the chair seats are carved with hand planes and spoke shaves. “I believe in using whatever tools are necessary to achieve the best result- and old world hand tools are a big part of that for me.” In his furniture, one can find subtle references to historical moments in art and design, ranging from Ancient Egypt to the Shakers to the Danish Masters- all while maintaining a modern thread that is specific to Kurtz.