Immaterials – Data between visibility and invisibility 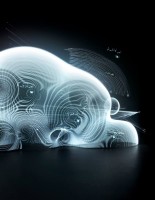 2010 BA in Interface Design at Potsdam University of Applied Sciences
2005 Education in Media Design at DA! Designakademie Rostock
.
Christopher Warnow (1982) works as an artist, designer and programmer in Berlin and Würzburg, Germany. He is interested in the hopes and the trust we invest in digital data and – images. In installations, performances and workshops he utilizes generative strategies to examine our enthusiasm towards digital technologies and questions its grounds.
.
During his teachings at the Berlin Technical Art School, the Hochschule für Technik und Wirtschaft Berlin and in workshops at the University of Applied Sciences Potsdam, Warnow explores the potential of programming as a means of establishing a personal image-language, freed from commercial restrictions. Recurrently he tests the potential of generativity in the visualization of information and in the form of audiovisual performances.
.
Christopher is part of the studio for generative design onformative.com and the media art collective We Are Chop Chop.
.
.
.
.
.
.
source: christopherwarnow

The problem of seeing a room filled with data is more and more prominent and pressing for designers. Lev Manovich wants them to »consider the ‘invisible’ space of electronic data flows as substance rather than just as void». (Poetics of Augmented Space)
.

.
Anthony Dunne and Fiona Raby are mentioning the electro-climate and electrogeography in their inspiring and intelligent book Design Noir. Electromagnetic fields – and therefore data which are carried in them – are interacting with architecture in the same way like weather and airflow does. Are screens the most appropriate way of visualizing and interacting with data? Does location-based-service means opening-a-webiste-at-a-certain-place?
.
Manovich is concerned that “an electronic screen becomes simply a moving billboard or a moving ornament.”. Dunny and Raby are proposing to think about a Hertzian Space instead. “Whereas ‘cyberspace’ is a metaphor that spatialises what happens in computers distributed around the world, Hertzian Space is actual and physical, even though our senses detect only a tiny part of the electromagnetic spectrum”. To design for the Hertzian Space is to work with immateriality.
.
Which form of data and metadata is appropriate in an Hertzian Space? A place in front af a screen, situated in the physical space. Inspired by the work Fictional Radio Spaces by Ingeborg Marie Des Thomas, who tried to illustrate invisible electromagnetic fields, this project shapes fictional data using the photographic technique of procedural lightpainting. The illustrations are moving between technoid hologram and personal handwritten note.
.
This project was a collaboration between the design studio for generative design onformative.com and me.